on August 12, 2015
UPDATE: It has been decided that Eve Drifter Wars violates CCP Intellectual Property rights and we have been asked to shut down the server. After much back and forth today in an attempt to find a way to save the project, it has become obvious that there is no way to save it. So obviously we will comply with that request.

We knew from the beginning that this outcome was possible. We had hoped that given the fan-created nature of the project, the obvious non-monetized nature of the site and general good will of the participants that it would be allowed to continue.

I will state again that I firmly believe in anyone's right to protect their own trademarks and copyrights. As a creator myself I've always been an advocate for creator-rights and I do understand the position that CCP is taking. I continue to strive for and hope for a clearly defined process by which creators can work with CCP to achieve projects like this one. And while huge strides have been made in the past year, much remains to be achieved.

I hope that everyone that got a chance to play and experience the game enjoyed it as much as Igor and I enjoyed building it. 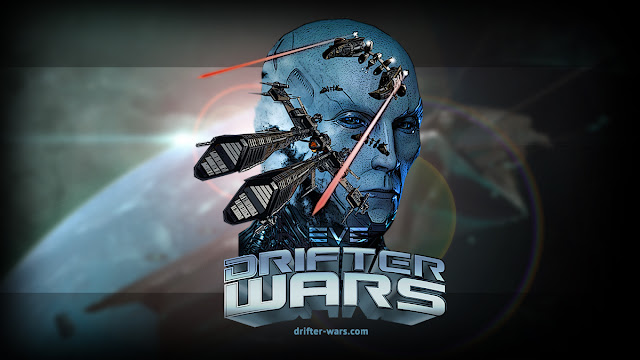 Back in June I had a little fun pretending that a game called "Drifter Wars" once existed as a Nintendo 8-bit arcade game. All of which sprang from a simple challenge in the Slack Creative channel from t-amber, asking me to create an Eve themed graphic similar to an old one he posted from Star Wars. Which led to CCP putting it up on their Facebook page and one of the Dev Teams adopting the image as their team logo. Which was an amazing run of events and a total blast.

Around that time I received a direct message on Twitter from Igor Puschner (@My_EVE_Online), in-game character name Commander Ogir, with an interesting proposition. Why not turn the concept into an actual, playable, real video game? Why not indeed. As usual I said yes. And what followed was almost two months of work, mostly by Igor, to develop Eve: Drifter Wars into an actual, playable video game.

Right off the bat we decided to keep the scope within reason, no sense turning this into a year's worth of work for either of us. But we also wanted to make sure it had enough content to be fun to play, challenging (like any Eve game should be), and contain some interesting options. I laid out the basic structure of a five level arcade side-scroller with each level having a Boss to contend with. Wrote some basic language to get us into the action and off we went. I want to make this perfectly clear, I have NO IDEA how he does what he does - but Igor Puschner is a genius! Seriously. This project would never have happened if it wasn't for him and his ability to work magic. And I know he has put a lot of extra hours into this thing to get it ready for today. He deserves most of the credit. And I can't possibly thank him enough for volunteering his time to this project.

I want to talk more about this project, but I'll go ahead and give you the link first. We recommend using Chrome or Firefox on your desktop to play (The game is not yet ready for mobile by the way):

"Challenging, methodical, and you get to kill Drifters. What more could you ask for?"


The game itself comes in two modes: Story and High-Score. You also get your choice of ships to fly, each with their own unique weapon system. Rifter. Tristan. Condor. And Tormentor. You can even call in a Bomber when you need extra help. As always the Drifter's are there to collect corpses, so once they have 10 of them from you the game is over. The story mode comes with five challenging levels, each ending on a unique and challenging boss that you must defeat to progress. Each level gets progressively more difficult and you will meet new and challenging enemies along the way. Meanwhile the story unfolds around you, behind you, and ultimately presents a challenge you may not be able to escape!

I am astonished at what Igor was able to accomplish. Every time he would write and tell me of something new and amazing he was going to add, more effects, more animations, more difficult boss levels! It was an amazing process between us, me providing graphics and play-testing the game over and over again, and him challenging me, and himself, with increasingly difficult goals. If you could have seen where we started and where we've ended up, you simply wouldn't believe it.

We did this for fun and because of our love for Eve and the community, and also to show off. I know Igor has plenty of other ideas for games and I've always been a huge fan as well. So we both hope you enjoy playing, spread the word to your friends, and check out the real Eve Online - which is infinitely better.


PS: I heard a rumor that if you go to the Control screen on the main menu and then push UP, UP, DOWN, DOWN, LEFT, RIGHT, LEFT, RIGHT, B, A that all the main spaceships turn PINK! This is just a rumor though. Igor calls it "Punkturis Mode".