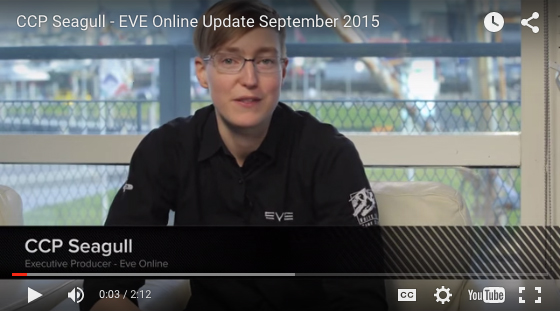 On the o7 Show yesterday and in a blog you can read here, CCP Seagull announced a change in the release schedule that we've become accustomed to. Essentially the same 5-6 week release schedule will continue, but larger and more connected updates will be collected into more formal expansions that will be launched whenever the heck they are ready. In addition Seagull promised to show up more often and talk to us about these things in videos and in more frequent blogs. More Seagull is always a good thing.

I was always torn over the rapid schedule of the mini-expansions. The constant iteration and development cycle was a welcome change from the previous quarterly schedule, but it also had its downsides. I believe the implementation of the mini-expansion concept probably had as much to do with internal CCP development changes and new leadership as anything else. And that side of things can't be overlooked. As a sea change, the rapid cycles probably did more to energize CCP than it did the player base. And in so many ways, that has to be counted as a huge success story for Seagull's reign as Executive Producer.

On the other hand, the rapid pace made it difficult to wrap your head around changes before new changes were being introduced. I remember a few instances when I was just getting around to being comfortable with something, and then it changed again. And if that is happening to me, I can only imagine it must be worse for other players. The cadence made it difficult for any single expansion to "mean" anything important. All you had to do was wait a bit and it might change under your feet again. It got so rapid fire that we, as a community, began to wonder why they still had names. Who had time to remember their names?

And so now we have what we probably should have had to begin with, a more hybrid approach to future releases. The iteration mini-releases will continue but now, every so often, we'll get a more "major" expansion that will introduce bigger and more inter-connected progress. It seems Citadels will be the first of these. I can imagine that Star Gates will be one down the road. Once more this will give players "destination" moments to look forward to and remember. As well as, one would hope, the opportunity for CCP to make hay on them ahead of time. Goodness knows the PR machine could use the opportunity to do so in the media.

It would be great to say this is the best of both worlds, and I hope that we can say that down the road. It would appear that this is the right path. Only time will tell. But you can put me down as being on-board and hopeful that this is the right approach. Constant updates and larger progressive releases will help to re-establish some impetus to the expansion model and impact interest in Eve Online moving forward.