on October 13, 2015
The Overview. If there is one part of Eve that seems to never change, it is the Overview window. Look back at early screen-shots and you'll see it has remained relatively unchanged since the stone age. Granted, major changes would require major overhauls to more than just the overview window. To effectively alter the way information is given to players would require a huge effort to re-think the entire UI environment. But what if there was a way to evolve the Overview right now? Without any other changes to the existing UI environment?

I think there is.

Let's consider not only the type of data being presented in the Overview, but also how people use that data. I believe that "use" is the key to unlocking a potential solution, without changing the type of data being presented. The sheer amount of information presented within the Overview is daunting. But in his book Simplicity, author John Meade said that, "Smart organization of screen elements can make the many appear as the few." In other words, it isn't the amount of data that is overwhelming, it is the way it is being organized. Right now we are limited to only a left-right column based organization, but what if we could break that down into easier to consume modules? Based on categories?

Depending on what you are doing in Eve at any given time, different information contained within the Overview is more or less important to you. For me, NPCs have no importance at all (for example), I don't even have them on my overview. For Miners, rocks are the most important thing while they are mining. For others, other information is more important at the moment. And right now, organizing the Overview requires a lot of effort that can be especially confusing for younger or less experienced players. In fact, I would argue that most players really don't understand how to organize their Overview properly. So the goal is not only organizing information, but doing so in a way that makes it significantly easier to use.

Challenging yes. But not impossible.

Let's start by breaking the Overview into five easy to understand "modules" or category windows:

In addition we will add (x) number of custom windows that the player can create, save and share with other players. (I imagine a maximum of five of these, but who knows.)

Ok that's cool, but that could get rather cluttered. So let's add yet another feature to help with that. What if each module could be presented in three different states? 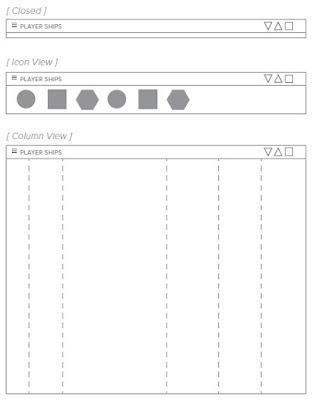 Each module window can be "closed", or used in "Icon View" or in normal "Column View". This would help de-clutter the UI environment and help players organize the information 'they' want, instead of being fed information they have no need for. In addition, each view can be filtered as usual to present even more re-fined information and customized colors, sizes, etc.

Also remember that we have added (x) number of custom windows to this, which players can use to create their own windows. Uses could be:

Out-of-the-box this system would aid new players by presenting information in pre-determined categories of data. ONLY ships appear in the Player Ships window, etc. This makes it far easier to disseminate so much information, by breaking it down into smaller chunks. It also gives a reason for the Icons, if you choose to break your windows down in that manner. Icons would be ordered by proximity by the way, or by sec status perhaps.
In addition, closed windows would pulse if something needed the player's attention. 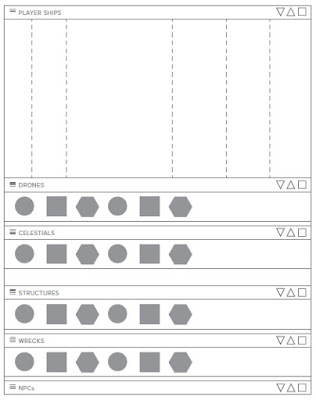 In this example, which is based on a potential PvP set-up, the player really only cares about other Player Ships in space. So that window is open and organized in the familiar column view. Other windows are also important, but for now he has chosen to view those in the Icon View mode. Closer items are first and remain lockable, warpable, and otherwise usable in the normal manner. And he has added a Custom Module for "Wrecks".

You can easily see how Miners, or Explorers, or others could customize their own Overviews to better present information they consider important.

Left alone the Overview wouldn't be that much different than it is today. But even without player interaction, information would still be presented in easier to understand chunks. Making "glance" dissemination even easier.

But the customization is where this approach becomes even more powerful. The ability to "break" apart the Overview window and put them wherever you need on screen, is powerful. In addition, less screen real-estate would be taken up by information the player doesn't really need at that time. Making the entire UI environment better as a result.

I could go into a lot more detail, but I think this is a good overview of this approach. It doesn't solve all the problems, but it seems like a good evolutionary step towards better presenting a massive amount of information to players. And giving each player the opportunity to better control what that information is, how it is presented, and in what format. In that way, more choice and control is placed in the player's hands.

What do you think of the idea?


PS: Morg suggested I call this the "T3 Overview", I like it.