Born out of a creative madness that merged the lunacy of Space Ghost Coast to Coast and Eve Online, the show is surely insane. While also clearly something that has never been attempted before outside of the fever dreams of Robot Chicken or other Adult Swim projects. It is, I can assure you, intentional lunacy. And while it has a legacy of inspiration, I believe it is its own unique creation. An uncanny valley of weirdness, strangeness and ludicrous invention. And I hope you enjoy it.

You wouldn't know this, but my last seven computers have been named Space Ghost. My current two Macs are Space Ghost 6 and 7 respectively. So yes, I've been a fan of Space Ghost since I was knee-high to a grasshopper. And so it was, after I had finished working on my "Why I Play Eve" entry, that my wife and I were talking about it. I had worked on that video simply to learn how to use a new piece of software, but the idea of it was sticking with both of us. (Essentially the idea goes all the way back to a short I made a while back called "Wanker".)

Eventually the conversation turned to Space Ghost Coast to Coast. And my wife made the suggestion that, perhaps, such a show could be made about Eve. I had made that connection before, but it had never settled. Mostly given the technical challenges involved. But this new software and some other things, made me think the idea just might be something that I could achieve. Perhaps. (I eventually gave up on using "animation" for this project as it is far to time intensive)

So here we are three weeks later. I'll leave the final judgement regarding success or failure to the viewer, but this was a huge undertaking. An idea that took off and became much larger and more involved than originally intended. And a good case study for "making things up as you go" planning. I had no idea that so many people would say "yes" to helping me, or be excited about being a part of something they hadn't even seen yet. I owe a huge bundle of thanks and appreciation to everyone I dragged into this insanity, thank you all for believing and playing along. I hope I've treated you well and you aren't sorry about agreeing to it.

All I can do is shake my head at myself. I fully planned on this thing being maybe a minute or two long, but then the song really came together for me. And then everyone in the ABA Slack channel started throwing ideas around, and then... well, one thing led to another.

One thing that I enjoyed, and that I hope to expand on more in future episodes, are ideas that have been around a long time here on the blog. For example, Svipul. That character comes directly from a post I wrote awhile back called "Svipul: A life in pictures" which is one of my more popular posts. The Mr. Mittens PSA comes directly from an old Anti-WCS Wallpaper I made. I like the idea of this world that Rixx has created. Being trapped in his CQ alone may have honestly affected his mind. I mean, where is the applause coming from?

I can only hope that you enjoy this as much as I enjoyed doing it. It was a labor of love for me, a huge project that I put my heart and soul into. It might be insane, or it might very well be genius, I have no real idea about which frankly. But I do know I worked damn hard on it and thought about every frame. And that it meant something to me.

If the response is good, I'll keep doing them. I already have enough ideas to fill ten episodes. And I hope to get even more people involved. Perhaps even incorporating pieces that other people create into the show. All I know for sure is that I had to get one done and now it is.

The rest is up to you.

Yes I am aware that Rixx walks into a Caldari CQ in the opening title sequence and that the set is actually a Gallente CQ. That was done on purpose for humorous reasons, but also because the Caldari CQ doesn't make for a good set. Next time I may dress a different CQ for the show. It is challenging however because you can't remove your avatar from the view inside your CQ. I wish there was a work-around for that problem.

The picture framed on Rixx's desk is of my wife's Eve character Omega Minus, from the Women of ABA Calendar post. It is facing front so the audience can see it.

Two of my newly available Frigate Posters adorn the walls.

There is a Space Ghost image on the wall behind the desk, along with the Anti-WCS logo, a Quafe sticker, an ABA Wall Lamp, and to the far right you can see a partial Vagabond Foundation logo under the Rifter poster. A Stay Frosty throw-rug adorns the floor in front of the desk. The desk is purposefully styled after the one Space Ghost uses on his show. The door to theCQ is wrapped in Police tape and above the door (blurred in the distance) is the latin phrase for "Abandon All Hope Ye You Enter".

I think that is all of the Set Easter Eggs.

I hope you enjoy the show. I can't wait to get started on Episode 2.

Special Thanks again to Marc, Arch and Max for agreeing to be in the first show. 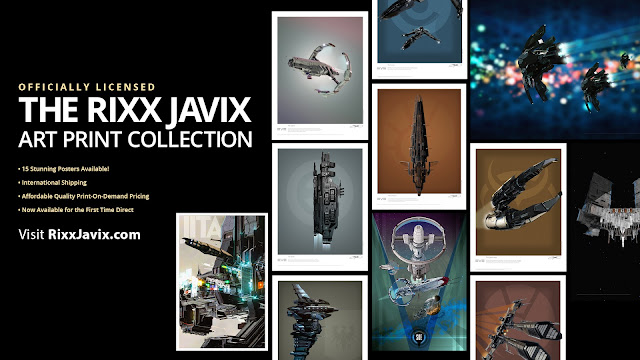