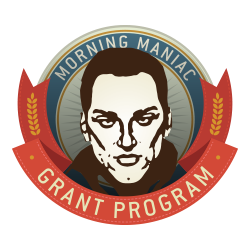 In yet another example of the amazing Eve community, Neville Smit has announced a Grant Program over on his blog. I highly recommend taking a look at it.

"When they have more money than they know what to do with, the idle rich often become philanthropists.  I have found myself in exactly this situation, bored and wondering what I shall do to occupy my time in game. But now I feel my interest renewed in EVE Online. I can use my excess funds to give back something, and try to help our player community, at least in some small way.

So, I have set aside a sizable portion of my funds - 20 billion ISK, to start - to begin a new charitable service: The Morning Maniac Grant Program.

For those who don't know, Morning Maniac was the founder of EVE University. Because of his selfless efforts, I found a place in EVE Online that enabled me to learn and develop the skills and knowledge I needed to succeed in the game. He was one of the most generous philanthropists in EVE Online history, and because of his contributions, thousands of players now fly successfully in corporations and alliances throughout all of New Eden."

What a great idea. If I was rich in-game I'd probably do something like this. But to be honest I am nothing but a poor pirate. I've never had 20b ISK at one time in my wallet in over seven years of playing Eve. And I honestly doubt I ever will.

I've never ever watched the Meta Show before. Its some kind of video podcast thing over on TMC. But Saturday evening someone mentioned that Mittens was talking about me on it, so I waited until it was available and scrolled thru it. I'm not going to link it, find it yourself if you want. I wouldn't recommend it.

It continues to amaze me just how clueless they remain. The argument from their side, as presented in the show and in Sion's article, is essentially that everyone is monetizing Eve and so we should all support their Kickstarter. Since the community saw fit to help me with my GoFundMe campaign, no one has a right to argue about their Kickstarter. This is such an inane argument it is hard to know where to start.

(Its even funnier watching that show on their site surrounded by advertising, promotions, donate buttons, subscribe buttons, etc.)

I'm not going to get into another long thing here. But clearly monetization is not the core issue here. The core issue is a poorly run and poorly conceived campaign that originated from a group that has proven over time to be un-trustworthy, self-centered and only interested in their own community. Not the greater Eve community. We can all argue why that is and others have done a great job of making those arguments. Once again, I'm only here to present reasons why this specific campaign isn't working. Because it isn't.

I'm glad the EOC.tv RUMBLE event went well yesterday. It didn't go well for me personally, but that doesn't change the fact that I supported it. Most events inside of Eve are difficult for me. I'm a dedicated -10 pirate and have been for the past four years. I don't want to tag my sec status up thank you. This means that many events are just not possible for me to participate in, which is fine and comes with the territory.

Originally I was assigned to a team that was forming up in a Low Sec station and everything was fine. But then, for some unknown reason, I was bumped into a team forming in High Sec. I had no idea where we were going, as no one would tell me, so me and the other Pirates joked about which of us would die on the undock. For me, this wasn't a joke. I swear I could jump into HS with twenty other pirates and the Police would kill me, while everyone else gets away. Which is exactly what happened. The police pointed me at a safe spot and took my ship away from me.

So now I'm stuck in HS in my expensive pod. So I follow the fleet along several jumps into more HS. Eventually as the gate camps continue to get worse I decide to dock up and wait to see where the final destination might be. Sadly the random HS station I pick is heavily camped by the CFC. A group that just might have a slight grudge against me perhaps.

Luckily I manage to get docked despite being shot at and pointed. I grab one of the many rookie ships in my hangar (been here before I guess) and undock, lose the ship but get the pod away.

At this point the FC contracts me a new ship, which is way back in the HS system we started in. I sigh, reject the contract and warp myself back to Ishomilken.

Like I said, I'm used to it. Don't feel bad, if I had showed up in the final system I'd be primaried off the field anyway.