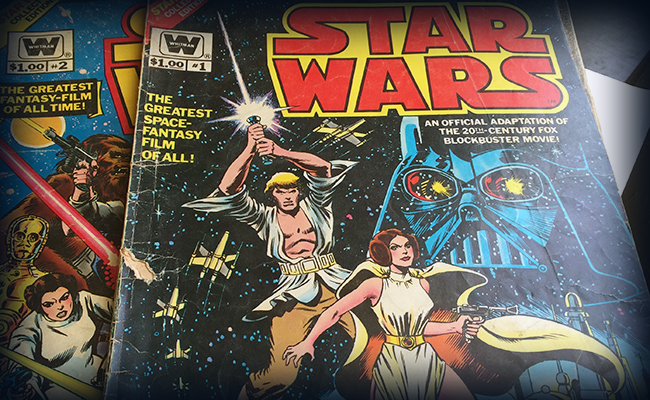 In 1977 I was a few months shy of turning eleven when my parents dropped me and my friends off in front of the local single-screen theater to see Star Wars. I believe it was the first day, but I can't be sure. The theater was packed, the line was around the block. At that moment, standing outside waiting in line, I was a normal proto-geek genius little-league all-star baseball player who was just beginning to realize just how amazing girls are. It would be wrong to say all of that was about to change, because girls got even more amazing later, but when the camera panned down and that Imperial Star Destroyer rolled out of my eyeballs... things changed.

Up until that moment genre was just another part of an interesting life for me. I enjoyed reading comics, watching old Star Trek episodes on re-runs, science-fiction, horror, whatever I could get my hands on in a small rural town well off the beaten path. But Star Wars arrived at the perfect moment, the crossroads of development, the turning point between childhood and those creepy teenage years looming on the horizon. Star Wars opened my eyes in many ways. Nothing like it had ever been seen before. That might be a hard concept to appreciate for my younger readers, but trust me, Star Wars on the big screen back in 1977 was mind-blowing.

In those days if you didn't see a movie in the theater you might never, ever see it again. This was a real possibility. Only a few movies would get picked up and shown on television and even then they'd have commercials and be "edited for television". (Oh how I hated those three words!!) So I ended up seeing Star Wars that summer about nine or more times, which wasn't that difficult back then, I think it stayed in the theater the entire summer that year.

And yes that Christmas was one of the best of my childhood. My brother and I awoke on Christmas morning to a tree loaded with Kenner Star Wars toys, action figures, ships, the works. Between us and all the other kids in the neighborhood I think we had the entire line amongst us all. We spent Christmas vacation comparing our loot takes with our friends. And no we didn't leave a single toy in the packaging! We played them all into the ground, those original toys got used and abused.

Star Wars ignited a life-long love of science-fiction, an interest in special effects, filmmaking, editing, and storytelling that continue to this day. The concept art and designs found in magazine stories and books ignited an interest in art and illustration that I continue to explore professionally today. Because Star Wars ignited my imagination in ways that nothing else could have.

I was fortunate to see Phantom Menace about a week before it opened. At the time the agency I worked for represented Fox and we often worked the sneak peeks for their films. I took my son to the sneak, he was six years old at the time. He dressed up as Darth Vader and helped me keep everyone in line before the show. I'll never forget him role-playing as Darth and wacking people with his little red lightsabre, all while breathing heavily and trying to be menacing. Despite the problems with the prequels, that moment will stay with me forever.

And now I have three other boys who watch Star Wars Rebels and the other shows and movies, and they are all excited about the new Star Wars movie coming out next week. Its starting to feel like this might just become a multi-generational thing that continues well after I'm gone to that hologram Jedi ghost place in the sky. And that's ok. That's good.

I don't know how the new movie will turn out. I'm excited for it. Probably grossly over-excited for it. The closer it gets the less adult I feel about the whole thing. I can't help myself. The world has changed a lot since 1977, I've changed a lot since then as well. An entire life-time has passed. And yet, I hope the magic is still there. Maybe, even in this contentious age of ours, it might be possible to feel a tiny bit of that old magic once more.

I know this much. Back in 1977 we all needed to feel a little magic. And I think it would do us all some good to feel it again right about now. Just a little bit would be fine.

May the Force Be With You.

PS: I think I still have the album (an actual record made of vinyl) that contained the Star Wars story told with a Narrator and the audio from the movie. When we couldn't see the film in a theater my brother and I would play that record over and over again. That is why, even today if I think about it hard enough first, I can pretty much recite the entire first movie from memory. I bet I listened to that poor record a hundred times or more.