When Did You Stop Beating Your Wife? 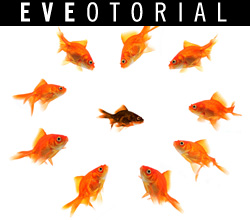 There is no way to "win" against a tidal wave. The best course is to let it make landfall and pick up the pieces afterwards. This is what I am doing. The more certain people speak the deeper the hole gets.

But I do start to wonder. What exactly do I owe these people? This bully who runs a prominent Eve Corporation clearly is not interested in the truth. He has insulted me, my wife, my family and everything that I've stood for in the Eve Community. He clearly has no problem with this attitude based on lies. He hates me for the wrong reasons. And before you start thinking that "hate" is a strong word, please listen to him rant and rave about me on the Open Comms show. This is a person who clearly doesn't care that everything he is mad about, everything he is clearly jealous about, is a lie.

So how much of my personal life do I owe you? This bully has stated clearly that he deserves to know everything about me, in fact he seems to believe it is his right to know. And yet, despite my attempts to be an open book and answer any question anyone has ever had - that isn't enough.

Clearly these Haters/Bullies/JealousRageMonsters share one thing in common, they are not interested in truth. They are only interested in protecting their own side of an argument they know I cannot "win". Whatever winning means in cases like this. What they all fail to realize or understand, is that I have zero interest in winning. I can't fight Pandemic Legion in-game and they know this. I can't fight 60,000 Goons, and they know this also. I actually have no interest in fighting them. I'm a low sec Pirate because I choose to be one. This is the game play I've chosen. So they know they are protected by their own largesse inside of Eve. Which is a great position from which to be a Bully, isn't it?

And so they make the assumption that such largesse protects them outside of the game as well. Which, granted, it largely does. There are no Police out here in the community. No one monitors or protects or guards against the words they choose to say. No one except me.

So, what do I owe them? Nothing. I owe them nothing.

In fact their words and actions accomplish the opposite of what they intend. Being bullied only reinforces what I have always known, you have to stand up for yourself in this world. You can't let people roll all over you. In these pages I've done just that over the past eight years, I've stood up to bullies. I've fought what I believe to be the good fight both in-game and out. I've called people to the carpet for idiocy, for aggression, for mistakes, and for picking on the little guy. And I learned a valuable lesson yesterday listening to Mittens on his show, it actually works. It was a surprise to learn just how much of my activity he is aware of and how much it bothers him. Turns out he not only reads this blog, but it bothers him. Let that sink in for a minute.

I am going to stop doing one thing however. I'm going to stop trying to appease the bullies. I'm going to stop trying to explain, when clearly they have no interest in listening. Let them rant. Let them rave. They are all clearly jealous and upset by the fact that this great community of ours reached out to me in my time of need. And that it worked. It worked when their own pet projects failed. My projects do not fail. When I set out to work with CCP I did it. When I set out to accomplish something I do it. I left the Tuskers because someone made fun of my children and leadership refused to do anything about it. So I set out to build a better Pirate corporation built around a great alliance that is WITHOUT Drama, and I did it. When the Vagabond needed its Frills back? Done. When we wanted Hats in-game? Done. When I set out to accomplish something it gets done. And yes, my GoFundMe campaigns (initiated by the community) succeeded beyond my wildest dreams. They also got done.

If you step out, if you expose yourself, if you stand up for what you believe in, you will be attacked. This is the way the world works. Eve isn't special, it works that way here too. I've always said what I believe and stood up for what I believe in, and some people do not like that. Those people tend to be very vocal, angry, jealous, and filled with rage. That's how it works sadly. There is nothing I can do about it.

Believe me when I say this is how I am in real life also. People have always told me that it can't be done. I can't be who I am. You can't create a Card Game. You can't write, produce and direct. You can't be the writer AND the creative director. You can't start your own agency. You can't do it. And yet, I did.

If you hear me and understand what I am saying then you are the silent majority. Do not despair, there are more of us than there are of them. Bullies are always outnumbered. They only thrive when intimidation works, when the threat is greater than our resolve.

A certain percentage of Eve thinks I'm a lying piece of shit? So be it.

The rest of you know the truth. I'm going to keep hanging out with you. I'm proud of you. I'm proud of the fact that you saved me when I needed it most. Nothing anyone ever says will ever change that. I'm not ashamed of how the community stood up and helped me and my family.

I am not ashamed.

And I never begged.

I didn't need to.