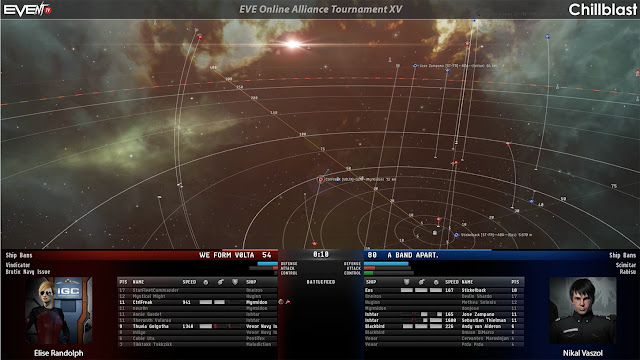 So today this happened.

In case you live under a rock and missed it, today we won our third match in a row and defeated We Form Volta (last year's third place winner) and move on to the next weekend undefeated. We are now one of the eight remaining undefeated teams left in the Alliance Tournament. Whoa.

Before the match I think about 31% of voters picked us to win. Which has been about our average during all three of our matches so far this year.

I could not possibly be more proud of our pilots and our FC than I am. I am not surprised however. We've all been practicing hard and for a long time, so I fully expected us to fly well today. We've known all along that if we were going to do well in the AT we needed to do it by out executing the other teams. And so far we've managed to do just that in each of our matches. So, while I am extremely proud of our pilots, I'm also not at all surprised. Just ask Apothne, I told him a few weeks ago we'd be making a solid run at the final four this year. And I still believe that.

I have to admit that I was more than a little disappointed that I didn't fly today. Don't get me wrong when I say that, we have a deep bench and everyone deserves a chance to fly in the tournament. However, from a personal perspective, I also want to fly in every match. I've spent a good part of three years training skills specific to the AT and a large chunk of personal time training for it. Like anyone else, I just want to be out there in the mix with my teammates. But while I am the Alliance Executor and the CEO of Stay Frosty, I am also not the boss of our AT Team. That honor belongs to Jose Zampano, who has been kicking ass as our Fleet Commander this year. Jose makes the rosters out for each match. And I'm fine with that. In fact, I set it up that way before last year's AT. And Jose has taken the ball and done an exceedingly excellent job of running with it. It has been a real treat for me watching that happen.

How far will we go? I honestly have no idea. The AT is often such a rock, paper, scissors tournament and luck certainly plays a role. As we continue to move forward it doesn't get any easier and the pressure only continues to mount. This is the furthest we've gone in three tries, so this is all new territory for our team. That is both exciting and terrifying at the exact same time. However, if I know our pilots as well as I think I do - we should continue to excel.

I filled out this Alliance Tournament bracket before the first weekend and I haven't touched it since then. I decided I'd make my predictions before the AT and let them ride to see how well I'd do. I also predicted we would end up in the finals against Tuskers. And, believe it or not, that Tuskers would end up winning. If you are curious I'm 59-37 so far, which is respectable. I'd do better if I changed some predictions obviously. But that ain't bad.

One match at a time. We have Lazerhawks to contend with next. Everything after that is not worth thinking about.

For now, I'm just going to enjoy the sweet taste of victory. For as long as it might last.