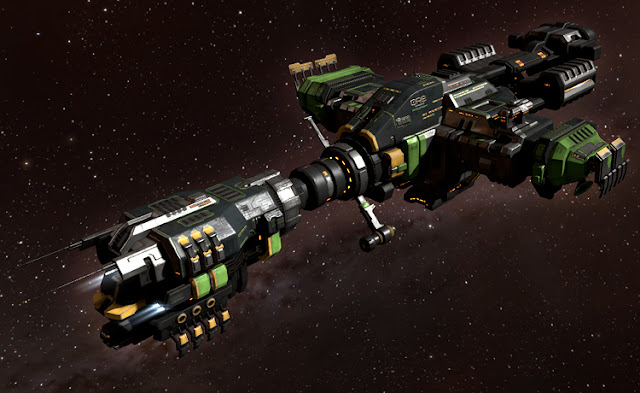 I've seen Porpoise on scan in High Sec when I travel my alt around to conduct business. I even saw one on scan in Null Sec once during a raiding party. But I had never seen one in Low Sec until Thursday evening.

Thursday evening was typical of my current state of Eve playing during the week. I usually have about an hour or so, sometimes less, to undock and have adventures. I remain puzzled why more players don't embrace the Pirate Low Sec play-style. All I hear is complaining about how much time you have to dedicate to Eve. Even people who have never played Eve before believe this. The owner of the company I work for wants to try Eve, but his major complaint is how much time you have to invest in it. So yesterday I told him about my adventures this week. How I had twenty minutes to play on Monday night and I managed to explode two ships and get into a few other fights in that short time. And then I told him about my hour on Thursday.

I fitted up a new blaster Comet when I logged in and undocked to cause trouble. I formed a fleet and we had 3-4 pilots in local at the time. (A large chunk of SF are down in Null Sec right now blowing up Brave Newbies and others.) Sadic, Firesequence and Ciba were around mostly doing their own thing. Right off the bat I noticed the Punisher on scan. The pilot flying the Punisher usually has back-up in local, back-up which can range from another Frigate to another Battleship, so it is always a situation to be wary. Luckily Sadic was in a Thrasher, so I warped in and caught him. He didn't have back-up this time. Or they were late...

Because that's when the Wolf arrived as if on cue. I have never seen a Wolf die so quickly. Granted a blaster Comet and a Thrasher dish out serious dps, so no real surprise there.

We don't see a lot of Mining Barges in Low Sec and when we do they are either tanked bait or part of a larger group. So when we spotted the Retriever on scan we all figured it was bait. And, at first, the local traffic tended to support this idea. The trick about local traffic is always knowing who is with who, are these ships connected or not? The life of a Pirate is so complicated and full of unknowns. We managed to chase the Retriever around a bit, and he'd keep docking up and then re-appearing again. Eventually local quieted down and we spotted him in the Ore Site again. This time we had him. And strangely for a Retriever he went down pretty fast. It wasn't until we saw the km that we knew why - HE DIDN'T HAVE ANY FITS!

One thing you can always count on in Eve - it is full of surprises.

Case in point. So I was tired of flying the Comet and decided to re-ship into a Hookbill. I undock and there is a neutral Tristan on the station. In cases like that I watch to see what they will do. Usually that involves docking back up in terror or warping off somewhere. Rarely, and usually only when they have the better ship, does it involve attacking me. I wasn't surprised when the Tristan red boxed me and started shooting, I was more disappointed than anything. My Hookbill made short work of his ship.  And I told him in local to never, ever do that again. I would have sent him some isk but then we spotted the Porpoise.

And then it disappeared. Must have just been passing thru. It happens. There is a High Sec gate in system and we get all kinds of weird traffic. But then it popped up again. I didn't even bother trying to scan it down, I took a chance and warped directly to the Ore Site at zero. Sure enough I landed directly on top of it and immediately got scram and two webs on it and started shooting. My fleet mates landed directly and we all made short work of the Industrial Command Ship.

That was only the third ICS I've managed to kill in Eve, the other two being Orcas. And one of those was in Null Sec. That is how rare it is to see one in Low.

After the expansion this week I fitted up some new ships. One of those is a new Stabber I've been wanting to try out. Luckily another Stabber showed up in local to help me. Raylan had been trying to get close to it, but it wasn't helping him do that. So I jumped into my own Stabber and warped over to grab it. Sure enough, when I arrived Raylan had already left and the Stabber had come down from its perch. It was a good fight, but the other Stabber couldn't break my tank and I had no trouble breaking his. I called Raylan back to get on the mail since it was his mark to begin with.

That was simply a case of his Stabber using 220s and mine using 425s. His was fitted for anti-frigate fighting and mine is fitted for killing Stabbers (and other cruisers). Yet another example of the rock, paper, scissors nature of Eve.

And that was my hour up.

How do you have adventures in Eve? It's simple. Undock, warp around, explore, engage, and try new things. Keep doing that and you will have incredible adventures. And remember, it is only a game.