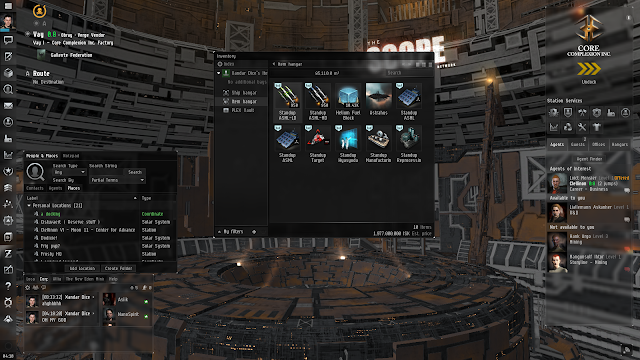 I’ve never had this sort of luck.

Yesterday (19th of December) I decided to pick up my Venture to do some mining. I had placed it in a citadel – an Astrahus – to do reprocessing and manufacturing, and I had specifically chosen that citadel because of its low tax rates. I recently looked at some of the structures in nearby systems, and it appeared that most Corps apparently use Astrahus citadels for manufacturing and reprocessing despite the Raitaru having the bonuses and a lower price tag. Maybe they want more defense, I guess.

When I entered the system for some reason I couldn’t find the citadel on my overview. I used the bookmark I had made earlier, which I intended for moments like this when I may derp out. I then warped to my bookmark and all I found was a hangar container and a repackaged citadel that I didn’t even notice at the time.

Where did it go? Maybe it had been destroyed as the corporation who owned it had 3 active wars going on. So, I checked the container, as I mostly do with containers I see floating around, and saw 900 million isk worth of structure modules, fuel blocks and ammo. I got pretty excited and started brainstorming a way to loot all of this before it could be taken by someone else; who wouldn’t pass up 900 million in loot?

Then I saw that those modules took a pretty large amount of space, 4000 m3 each, along with 10 to 20 thousand m3 more of fuel blocks. I proceeded to buy an Iteron Mark V (as I’m Gallente) from the nearest station, then swapped out my Vexor Navy Issue for that. A few minutes later I was warping back and forth between the container and the only NPC station in the system, while the suspect timer kept resetting, although it wasn’t too much of a risk as most highsec folks don’t really care.

About half an hour through the hauling process, I (finally) realized that the citadel was right there, bundled up, offline, unanchored; a once mighty structure now floating like abandoned junk. I had to liberate it from its lonely position in space, but then my Iteron did not have enough cargo space to fit the citadel in its already spacious cargo bay (compared to my Vexor Navy Issue, but it’s still an awesome ship nonetheless). That problem was very easily solved by buying a couple of Expanded Cargohold IIs and fitting them onto my Iteron, although the subwarp speed of the ship was barely 100 m/s at this point.

However, it didn’t really matter, and soon the citadel and the remaining fuel blocks were all now in the comforts of a Minmatar station.

As an alpha clone, I should be jumping over walls in joy, as this is more than enough to go omega even with the inflating PLEX prices. However, I still haven’t felt the impact of such an amount of money for some reason. Anyway, I am still deciding what to do with my newfound riches, as owning an Upwell structure is one of my Eve goals.

So, I guess, keep your structure bookmarks.

And Stay Frosty, no, this isn’t Toothpaste Fish.