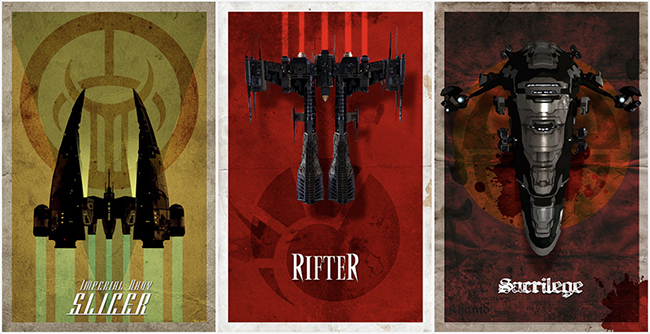 Today I want to talk about these three posters I created in September 2012. And the journey that happened in the next two years that eventually led to an entire explosion of illustrated posters. A story that hasn't been told yet. (You can see the above posters over in my Flickr account at the following links - Slicer - Rifter - Sacrilege and then the entire series that came later - which eventually led to the posters that CCP sold.)

You might find this hard to believe, but despite living an entirely creative and artistic life both professionally and privately - when it comes to being an "artist" there are some people in the world who would not consider me one. One of the most powerful of those, in terms of my own life, would be my former spouse. Without getting into the weeds on that discussion all you need to know is that she didn't consider me an artist, or what I did art, and she made no bones about expressing that opinion often and at great volume. Especially in front of others. In the summer of 2012 one such incident got rather horrible and she finally came right out and said it in front of a room of people. It was then that I made the commitment to once again add the designation "illustrator" to my list of abilities.

Come Hell or high water I would (once again) become an illustrator and eventually sell my work somewhere to someone. Please understand that I have always been an artist in both my mind and in reality. I've drawn professionally my entire life, both by hand and on a computer. Once, long ago, I even drew comic books and got paid to do so. But design became my chosen career path over the years because I was really good at it, the pay was better, and it still often included drawing, illustration, painting, and other artistic pursuits. This is all semantics. But being insulted for decades made it a point that I needed to prove. To myself mostly. Plus it became extremely therapeutic and cathartic for me. When I needed both those things.

Those three posters above were my first attempts at exploring the possibilities. Each one was created in a completely different way. The Slicer was drawn in pencil first then scanned into the computer and rendered entirely in Photoshop. The Rifter was a composite of pencil and ink that was scanned in and created solely in Illustrator. And the Sacrilege was a screenshot I took, which I manipulated in Photoshop, but finished in Illustrator. All three posters were then composited and color managed in Photoshop. I was trying out techniques and seeing what each could do, what felt the most comfortable, and what I was able to accomplish. What I discovered would set the stage for the greatest outpouring of creative energy in my entire life.

There are 164 Illustrations in the collection on Flickr. The first one was created over the Summer of 2014. It took me almost two years of trial and error to get from the first three to the beginning of that series. Even so, many of the finals in that series are not finished pieces. What you see in some is incomplete, unfinished, and often abandoned pieces. Not all of them, but a lot of them. When I look at them that is what I see. And even today I can tell which are which.

When CCP started talking to me about creating t-shirts around the designs. And yes, t-shirts was the first idea from them. I knew I would have to re-create any art that they decided to use. Especially when it became a concept about Posters instead. Each of the pieces used in the final posters is complete, finished, and final. Each one done specifically for that poster.

Last night I made the final call to an art printer in Las Vegas for a very special Lumachrome Print of one of my digital paintings to auction off for charity at the Eve Vegas auction. And even now, I am extremely nervous about it. I'm still fighting those demons. Even today.

I'm sharing this to help shed a little light on why this moment, this specific moment, was so important to me.
And maybe give you a tiny little glimpse into why I cared so much, why I drove myself so hard to create an insane number of posters, why I did the things I did - because it was important. I had something to prove, to myself mostly. The past became less and less important as I went along this path. And more and more all I cared about was the future. My life and my work. And all of you that have shared this journey with me. This great community of ours.

I keep every photo you've sent me over the years of my work hanging in your game rooms, your offices, your walls. And all the notes I've gotten from people that love my work. I keep them all.

Just know this, when I sometimes say Eve saved my life - I'm not being metaphorical. Eve and the Eve community literally served as my crutch through the worst years of my life. And for that, and for all of you that have been a part of that, I will be forever grateful.

Thanks for sharing this journey with me.