Pirate Lifestyle - Living by the Sword 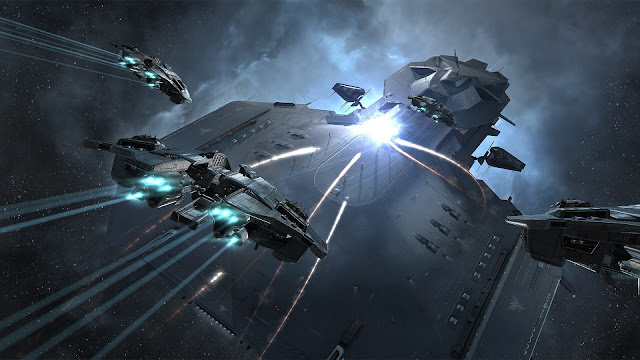 If you haven't yet, I recommend reading PvP Lifestyle - Living By The Sword over on INN. I've never recommended an article from there before, but this one deserves your attention. Lots of good thinking about the future direction of Eve.

While I care about all of New Eden, my primary focus is naturally on Low Security space. I've spent millions of words over the years trying to not only promote the benefits of my playground, but also recommend changes to encourage its continued growth. We are in desperate times in Low Sec, overall traffic is down, participation is low, and we are seeing log-ins dropping across the board. One faction dominates Faction Warfare. Plex are empty. Belts are likewise. Structures are everywhere providing more safe havens, tethers, and guns. A safe place to spin. But little incentive to engage. Less engagement means less need to log-in. And the cycle continues.

While Stay Frosty remains one of the most active Corporations in Low Sec, even we are seeing the impact of this climate change. Over the past six years our monthly average of kills is right around 2,000. For the last five months those numbers are 731, 998, 1,112, 834 and 883 so far in November. In the last year our average weekly active numbers have dropped from 55 to 35, in a total membership that remains around 300. (Which is where we like to keep it)  And while you'd be right in questioning using Stay Frosty as the bell-weather for all of Low Sec, I'd caution you against thinking that. I keep very close tabs on the killboards of our neighbors and I can assure you they are all feeling the pinch. Heck, many of them simply do not exist anymore. Or they moved out.

It is time that CCP started thinking differently about New Eden and I like many of the suggestions in that INN article. Many of which I've made myself over the years. Especially when it comes to Faction Warfare in Low Sec. I've always been an advocate for FW as I think it serves an important and vital function as a bridge to PvP, an introduction to Low Sec, and a motivation for engagement for a lot of players. Unfortunately it is dead as a door nail right now. And that's sad, not only for LS but for New Eden as a whole.

But it is time to start thinking differently about Low Sec. It should be a training ground not only for PvP content, but also for other activities as well. Including Sov. Think of Faction Low Sec like SovLite. And that is primarily where I'd like to focus my expansion thoughts based on that article. I think Faction Warfare and the role of Pirate groups like Stay Frosty can be evolved into a much more dynamic and player driven system that rewards players on ALL sides - and not just one side over another. Us scoundrels need some love as well.

So think of each FW system as a place that can be influenced and controlled by those that have the most to gain and the most to lose by doing so. Faction Warfare certainly, but also Pirates. Right now we have a tremendous amount invested in our home system. Two Citadels, several Mining thingies, and some Engineering thingies. Not to mention all of the infrastructure, transportation, and support that goes into that. We essentially control our own space. And yet, we gain nothing from doing so. Zip. Zilch. This is a system that does nothing to encourage or benefit our players to log-in, defend, or promote our own space. I think that is a bad system.

When I'm talking about Pirates I'm talking about a horribly under-served group of LS based Corporations like Stay Frosty, Black Rebel Rifter Club, and those that remain committed to our space. The extensive Eve Lore pretty much ignores us completely, in fact it is difficult to even find us mentioned. I think that should change. I believe there should be a lore based reason for Pirate groups to exist, perhaps as Empire Ex-Pats, or some other type of rebellion, etc. If we can at least get a baseline for our existence, then out of that can grow a more complete picture of what our goals might be - and then the game can help support those.

Until then, all I'm left with is concepts that are based on the current system as it exists now. And I strongly believe that system needs to change drastically. But I do have several concepts that I'd like to put forward that showcase what I'm talking about. And that hopefully serve as jumping off points to even greater ideas that can be executed quickly.

I think the controlling group in a system should be immune to gate and NPC station guns. And that includes Pirate groups. This makes an insane amount of sense if you think about it. I know that immediately a lot of people will start moaning about gate camps, but gate camps are content. And right now, unless you have a dedicated group to support them, they are very hard to effectively mount. Which should not be the case for defenders.

I also want content specifically created for Pirate groups. Imagine a Pirate Plex that is spawned based on the activity level of -5 or below individuals in a given system. Only -5 or below individuals can access the content of this Plex, but anyone can enter to defend it. And they'd want to do that because if it is completed it impacts the influence of the system it is located in. Now you've given Pirates a source of income, a source to impact influence, and a reason for FW pilots to engage them. And a reason for Pirate pilots to log-in.

In addition FW pilots that defend themselves and kill a -5 or below pilot receive a reward for doing so. Be that Bounty, LP, or ISK I leave to smarter people than myself. But they should get a reward for defending themselves.

I think a little bit of creative thinking can go a long way towards creating an Eve that is increasingly engaged in ways that we can only imagine today. I think ALL choices should come with benefits and consequences. As someone who has lived as a -10 pilot for the past six years I can tell you there is no benefit in-game for that. There should be. Even if it is rotten. And the same holds true for any other activity or sec status or career choice in-game.

The base systems are already there. The time is now to make the changes that can help ensure that Eve survives into the next decade as a vital Universe of engaged players.

If we don't I'm not convinced it'll make it that long. And my doubts are mostly based on Null Sec, but that's a topic for another day.