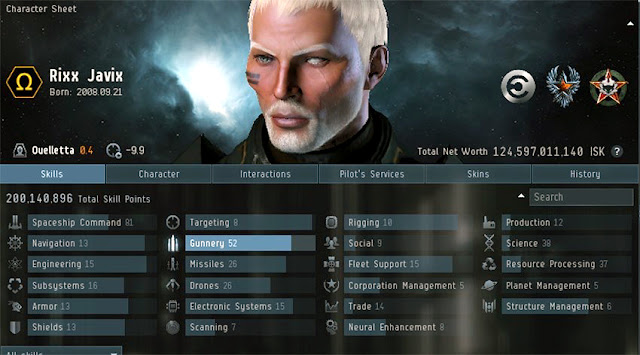 So yesterday I passed 200 million skillpoints on Rixx. The skill that did it was Capital Blaster Specialization IV.  Ten years and six months later and the last great milestone has been achieved. I say that like it means something, and while passing 200m skillpoints is a big deal and a long-time goal, it is just another arbitrary milestone. It only means something if you want it to mean something.

Almost all of that training has been done the old-fashioned way. A few times before an Alliance Tournament I have injected or topped-off a skill or two, but mostly I never needed to do that. I only have one level V sub-cap spaceship skill to train and that is Precursor Battlecruiser V, I paused that train in order to train up the Dreadnaught skills. I have all other PvP Sub Cap skills fully trained. And almost all of the support skills, except for a few weird ones out on the edges.

So after I finish these last few Dread skills, what next? It is entirely possible that skill training for Rixx might come to an end here in the next year. Right now my skill train is sitting at about 345 days and is full of very obscure skills and remaining level V top offs. Stuff that I don't exactly need, but things that could prove useful in certain situations. But not much of a critical nature. Except for Medium Beam Laser Spec V maybe? lolz.

But the truth is that I will more than likely just keep training Rixx until the heat death of the universe. Every time I look at the skills I see things that would be nice to have. So we'll see.

I remember my first 1 million skill points. I remember what a big deal my first 10 million, 20 million, 50 million - what they all meant and how important they all felt. But I also remember the advice I got from an older player back in the early days, "There is always more ahead than behind." For the first time since I started playing back in 2008 it feels like that isn't true anymore. And maybe, after everything else, that is the meaning that this milestone has that the others didn't. There is less ahead now.

Gosh, that felt kinda sad to write. This was supposed to be a happy post!! 200 MILLION SKILLPOINTS! Wooohoooo!

PS: Some of you may have noticed I am currently -9.9 and not my usual -10. This is because I got bored and started shooting those NPC mining fleets for fun. The fun part isn't shooting them, but dealing with the support fleets that come to their aid. I have to admit, those are pretty fun for NPCs.