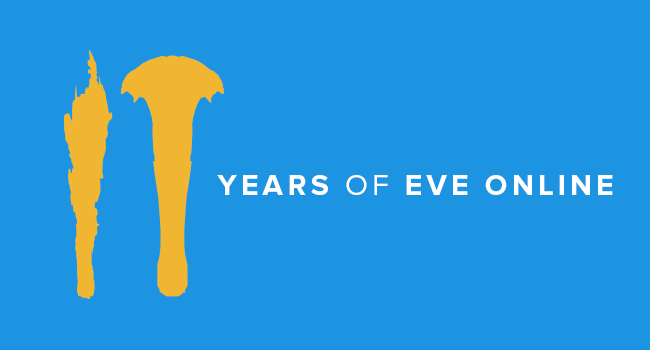 To be perfectly frank I was dreading writing this post. Last year was my 10th year anniversary and that seemed monumental and important, whereas 11 years...? I dunno, it's just the 10th plus One isn't it? But then I started to think about all the things that have happened since last September, Eve Vegas, Eve Amsterdam, Eve North, Alaska, Steel City Eve, that's five major Eve events in the last twelve months! Not to mention the horror show that was our attempt to get to Eve London in an ice storm and the subsequent weekend living in a hotel room. Not to mention that at all. So, almost six Eve Events in the last twelve months. Whew.

Inside of the game we've started down this Chaos Era path, local is gone, local is back, cyno changes, and all the associated stuff that has changed in the past year. But all that has done is make the lack of a plan more apparent than ever. When was the last significant change/upgrade/addition to Eve Online? Citadels? That was 2016, almost three years ago. In the past year the "Eve is Dying" crowd has ramped up their cries across all media, it became so bad that the Eve Online Facebook group moderators banned posts about the subject.

I exploded 411 ships in the last twelve months. Stay Frosty purged half of our membership and worked hard to become even more active and engaged over the past year. I trained and flew my very first Capital ship (Not counting my alt's Archon which I've had for eight years) and promptly lost it the first time it undocked in anger. I went months with very little time to play and I've gone months when I've had more time to play. The usual. I've made it eleven years because I learned a long time ago how to manage my Eve playing time properly.

My favorite thing from the past year has to be this:
Being able to quickly decide to go to Eve Amsterdam and hand deliver this piece of art to CCP Guard has to be the highlight of the year for me. The way everyone came together to make that happen is epic and just goes to, once again, prove how incredibly awesome this community truly is.

In the final analysis it is the friendships that we've made that keep me going. Whenever my mind wanders over the idea of quitting or stepping away from Eve it is our friends that make that unimaginable to contemplate. My friends in ABA and Stay Frosty, my friends in the greater Eve Community, at CCP, and across the globe are what makes this experience worth living. And I honestly can't imagine walking away from that.

As nutty as it can be at times, as weird as some people seem determined to make it, I wouldn't trade it for anything. Anything less than a million dollars at least.

Eleven years. I never would have imagined it. And now I can't imagine life without it.