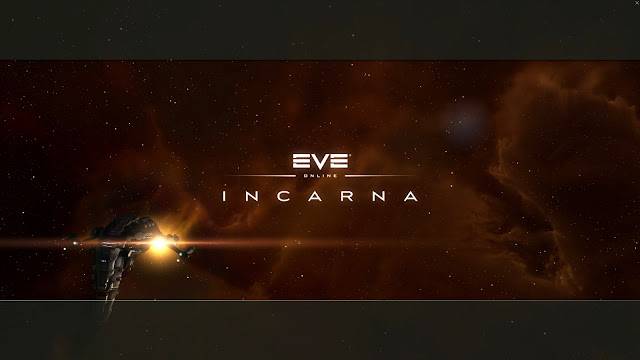 When I was at Fanfest last year part of the charity auction was key-art from each of Eve Online's expansions. I wanted to do my part and help charity, so I bid on just one of them with an eye towards ensuring I won it. The one I chose was for Incarna. And, with some crafty negotiations with several players, I made sure I did win it. Today it sits above my head and reminds me of many things.

Someday when someone writes a real history of Eve Online the Incarna expansion will be seen as a turning point in that history. For good and for bad. CCP learned several important lessons from the experience. They learned that they can't trust their own player-base. They learned that hubris alone wouldn't save them. And they learned that "Jesus" features can go horribly wrong. The players learned lessons as well, although I often wonder if they learned the right ones. No doubt that any potential of "golden ammo" in Eve is a bad idea. And certainly monocles and pants can be over-priced. But killing an entire thread of development and trying to humiliate those trying to make Eve better... I'm still not convinced that was a good idea.

The long-lasting echoes of Incarna still reverberate today. Now we get slow, drawn out expansion and developments. Although those have been building in scope over the past two years with Citadels, Drifters, and Triglavians coming into their own. The days of the major expansions has been behind us for a long time. These days I'm likely to hear from new players, "Why don't we have walking in stations? That would be so cool."  All I can say in reply is, that is a long story.

Essentially WiS was simply a case of extremely bad timing. Eve is a game about spaceships and that alone is enough of a problem for CCP to realize sometimes. (Just look at the lack of spaceships in their merchandising!) Focus on space. In the final analysis that is the most important lesson from WiS and Incarna. And technology. Let's not forget the technology upgrades that CCP has invested in since Incarna as well.

So where does this all leave us, the players? Personally I think something big needs to happen and happen soon. Since Seagull left we've lost any semblance of a roadmap to the future. No one has mentioned player built gates in forever. Or new space. Or anything that was on that old roadmap. All the updates, new races, abyssal space, everything has been solid. We can argue about the details and disagree about the ultimate impact that Citadels have had on space - but progress has been made. But I once said that the "big dream" was gone. And it still feels that way.

Eve Forever is not enough. We need to dream big again. We need it to shut up the "Eve is Dying" crowd, to attract new players and bring back old ones, to generate excitement for a game that is getting long in the tooth. All of which sounds logical.

But will it happen?

There are as many ideas about where Eve should go as there are players. Everyone has an opinion, a pet theory, or a simple guess. This however, is not our job. I can write all the words about where I think Eve should go next and nothing will happen. All I know for sure, is that something needs to happen. Something big, exciting, and powerful.

As someone who has spent a lifetime offering marketing and business advice to clients - that is my two cents worth. Regain the edge. Claim the big picture. Share the excitement. And ensure that it goes as planned. That will inject this aging game with some new found vital energy.

And then maybe, just maybe, Incarna will no longer be the turning point in Eve's storied history?

And my Incarna print will be worthless.