What I want from Eve Vegas 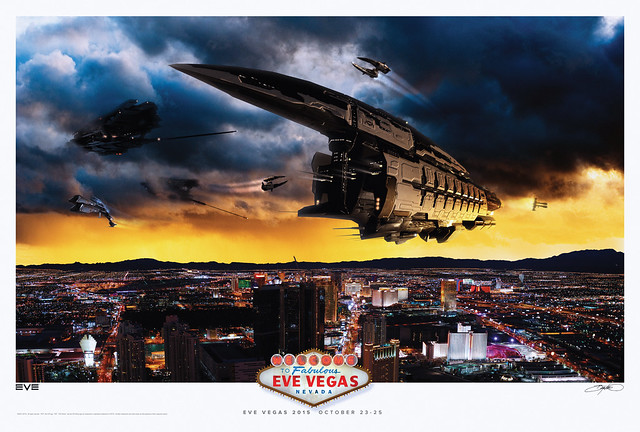 Eve Vegas was the pure definition of a mixed bag last year for me. Not only was I in extreme physical pain during the trip (my shoulder was painful and not working properly), but certain people worked hard to make parts of the trip painful as well (the past is the past and I'm putting all that behind me), but the city itself represents much of what I find disgusting about America right now - out-of-control corporate greed, involuntary taxes, sex work, the frat ethic, not to mention the huge environmental impact a city in the middle of a desert has on water conservation, farming, rivers, and... well, you get the picture. We managed to have a great time though. We really did.

So it is that time of year again. Eve Vegas is this weekend and it will be the last official CCP sponsored event in Vegas. It is also the next to last event on the Invasion Tour this year, with Eve London being the last one. And while I won't be there I did help out on some projects that I'm excited about for the event and for The Able Gamers charity fundraiser, so that's good. Eve Vegas usually represents the end-of-the-year announcements from CCP regarding the direction of Eve, so I'm hopeful that this year will be no exception. And while I'm trying to keep my expectations realistic there are a few things I'd like to see come out of Vegas this year.

1) A Sense of Direction
Remember when we had a roadmap? While I don't expect a replacement roadmap it would be great to have some sense of where Eve is heading next. Something about the future, hopes, dreams, concepts, something to indicate that such a thing actually exists. A classic Russian five year plan would be incredible and while I don't think we'll get that, some hints at one would be welcomed. Right now much of the Eve playerbase is aimless and looking for direction. Even if it is bullshit of the highest order, give us some indication that someone is looking down the road. Please.

2) Conflict Faucets
A lot of time and energy has been spent on ISK Faucets and getting those better balanced, which is time well spent. But conflict in Eve operates much the same way, and I think it is time we focused more energy on those Conflict Faucets. I'm not an expert on the state of Null these days, but even I know it has ground down to a rather stagnant and boring meta. I know this because I hear about it all the time. Low Sec is not immune either and certainly FW needs some much overdue attention as well. All across the board the reasons for and against conflict are drying up and some much needed incentives would help to drive conflict. It'd be great to hear something about this.

In my humble opinion those are the two major areas I hope to see addressed coming out of Vegas this weekend. I have lots and lots of other things I'd like to hear more about, but those two are the biggies. If we have a sense of direction and admit that conflict faucets need addressed, the rest is window dressing. Without those two big ones anything else is just the same old same old, some new skins, some new instances, new ships, and whatever else is going to be used to distract us.

Otherwise I hope everyone has a blast and enjoys themselves. Despite my feelings about Vegas I'm still sad I won't be there this year. So I look forward to hearing all about it.

Drink responsibly and have fun.