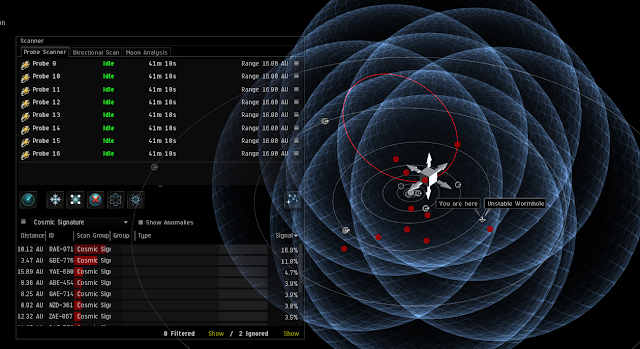 Years and years ago when I briefly lived in Great Wildlands I taught myself how to use Probes to track down stuff in space. It was mostly boring there and I had time on my hands. I got pretty decent at it and then moved away from the area. Stopped doing it. And then CCP changed everything about probing. I never got around to trying it again for one major reason - I'm a single character player.

And for single character players like myself the options have always been pretty grim. But fortunately I've always had access to great probers in my Corporation/Alliance who do the job much better than I ever could. So there was rarely a need for it, I just adapted my play style around that problem, much like I have for all the other problems. I did this primarily because there was no viable PvP option for a ship that could also probe. So no worries.

Then last year someone dropped about 20 Mobile Depots in a system in the neighborhood. So I decided it was time to teach myself how to use the new (for me) probing system. I couldn't just keep relying on the old, "I suck at it" excuse anymore. Time to buckle down and teach myself. So I fitted up a Manticore specifically to use as a anti-mobile depot ship. As always it was frustrating because I'd have to offline the torps in order to use the prober and vice versa. But it worked. And Mobile Depots turned out to be great practice, they don't move. And blowing them up annoys the neighbors.

Like I always say, we are our own content in Eve. Nothing going on? Then make something happen. So for three months last year I had a little side war going with some locals. It helped pass the time when things were otherwise slow.

And then the Jackdaw swarm arrived. Jackdaws were everywhere suddenly. And a bunch of us in Stay Frosty determined to find ways to kill them. No one did it better than my good friend Watson, who developed a knack for killing Jackdaws with his Lachesis. He got so good at it that he single-handily changed the entire meta. We all killed Jackdaws. But one side effect of that effort was that it introduced me to the Jackdaw again. I always say the best ship to kill another ship with is the exact same ship. My Anti-Gila Gila works extremely well. But the Jackdaw has one other benefit, it can be an effective PvP ship that also fits a prober!

So sometimes I'll grab my Jackdaw and try my hand at probing something down on my own. I typically don't need to, there are plenty of people around who are much better at this or that fly multiple characters. That situation hasn't changed. But sometimes the situation arises to do it yourself. And I'm still trying to get better at it.

So yesterday I spotted a Brutix on d-scan in a neighboring system. I knew it was running a site because it wasn't on anything else. So I went and grabbed my Jackdaw to scan it down. I warped onto a perch in deep space and launched my probes. I could see the Brutix on d-scan, but no matter how much I tried it just wasn't showing up on the probes. Honestly I did this about three times. Nothing.

I brought my probes back into cargo and it was then that I realized I had Core Probes loaded!

With my tail between my legs I went back to station and fixed that problem. It's amazing how much easier it is to do something when you are using the right thing. Two scan passes and I managed to lock down the Brutix and warp in for tackle.

I'm not going to share the kill mail, as it turned out the player was just returning to the game after being away for a few years and the fit was not great. You don't know these things until after the fact, but we did manage to talk about it afterwards a bit. The hardest thing from my side was managing the swarm of NPCs that were also trying to kill me.

This isn't the first ship I've managed to probe down and kill, but it certainly was the biggest one so far.

Who says you can't teach an old dog new tricks?