Yesterday CCP added the Fallen Capsuleer Memorial to the Planet 2 Moon 1 cemetery in the system of Molea. I had been invited to attend a funeral procession with Ashterothi and members of his group, but my Wife ended up having a ton of meetings yesterday and it was impossible for me to get on comms, so I ended up going down by myself. Or, at least, my positive sec status alt did. I took an Abaddon with me that has the Valkyrie skin on it, that seemed to be most appropriate. I grabbed seven canisters and placed each one around the memorial in honor of people that I have known that are no longer with us. 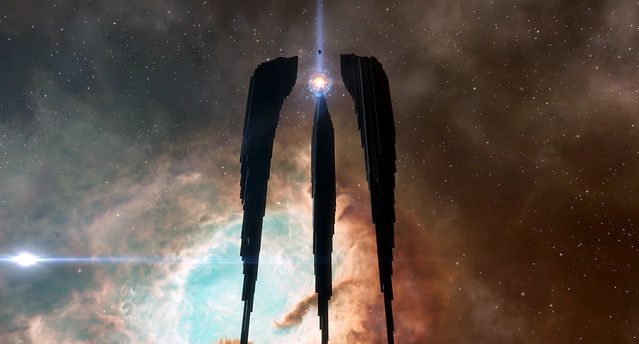 I've said this before, but I think it bears repeating. If Eve is actually going to endure then it needs this place. For a virtual universe built of pixels it is surprising how emotional and impactful this place is. And I was moved by it, even more than I anticipated. It is a powerful spot in our shared universe and I encourage you to make the pilgrimage at some point.
I also learned a lot yesterday from CCP Aurora's write up about the history of the Molea cemetery. I didn't know the details of that history and I appreciated hearing about it in more detail. That's one of the things about Eve that can be both frustrating and exciting at the same time, our history is more than a few big events. It is a rich and amazing tapestry of player actions, and cascading moving pieces that are often hidden from view. I'll be the first to admit that it is impossible to grasp all of it. Even when you are trying.
I've personally been advocating for an in-game player memorial for almost a decade now. And I'd like to hope that I had even a small part in helping to get this site into the game. Anytime I say something like that someone is bound to take it the wrong way. I don't care about credit, all I care about is that now we can fly down to a spot in New Eden and pay our respects to those who are gone. That's all I ever cared about. But that is also history, isn't it?
Which is why I used the music that Aiden Mourn created for the Ring of Fire Project on the video above. For history. Plus it is a gorgeous piece of music that deserves to be heard.
“Like a wind crying endlessly through the universe, Time carries away the names and the deeds of conquerors and commoners alike. And all that we were, all that remains, is in the memories of those who cared we came this way for a brief moment.”
― Harlan Ellison
Thank you to everyone at CCP Games that had a hand in creating this memorial.
CCP Eve Eveoganda History Ingame New Eden