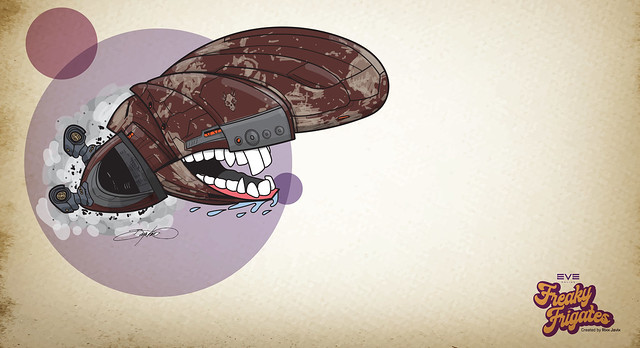 I'm releasing wallpaper versions of my Freaky Frigates illustrations over on my Flikr.
Yesterday while I was in-game New Eden was mostly empty and not much was happening. This happens. But the one interesting thing was how many times I got talked-up in local. At least six different players felt like telling me how much they enjoyed Freaky Frigates in the Eve Gear Store. Which was pretty awesome to hear. Usually I get either one of two responses in local chat. One is the "I love the blog" response, which is always great to hear and thank you. The other is the "please don't explode me" response, which is also great to hear and thank you. That one has a million variations, some of which often include profanity or questions about my manhood, but I understand. It's all part of the game.
Feedback is often hard to come by. These days it is mostly limited to my activity on Twitter. That's where most of the feedback I get comes from. Sometimes Facebook or LinkedIn. And sometimes over on Discord. And rarely in the comments here in these pages. No matter where it happens, I always appreciate it. This past week I also got a bunch of in-game emails from my fellow players and those are also always appreciated. It's nice when someone isn't yelling at me.
The point I want to make is this, it is ok to let me know stuff. You are not bothering me. I work in a vacuum, only made much, much worse by this damn pandemic. Like many of you I'm holed up at home almost 24/7 working across from my Wife who is also working from home. We try not to go anywhere we don't have to and stay safe. So it is awesome to hear from you.
Anyway, I didn't have much to talk about today and I've got a pile of commissions that need to be worked on. Enjoy the wallpapers and I'll be releasing more of them over the next few days.
Until next time, stay safe out there.
Art misc wallpaper