The Tale of Two Rifters 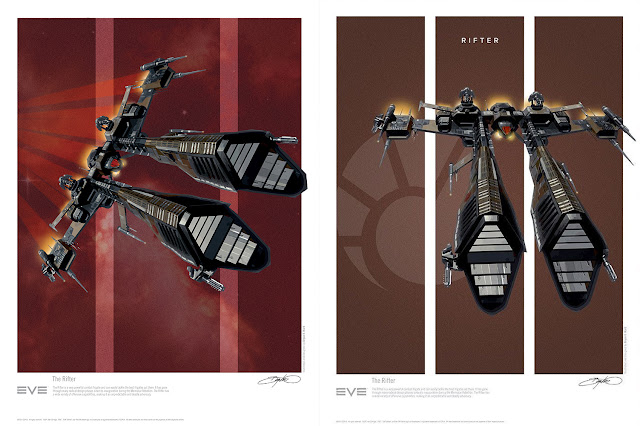 Today I want to share a story I have never told anyone. This happened a long time ago and all the people involved are long gone now, so the statute of limitations should have long expired on it.

The image at the top of this post should be familiar to most of you. After my initial run of 4 Battlecruiser posters was successful, we decided to sell another set of four posters and I went with the Tristan, Condor, Rifter, and Executioner for the next set. The image above, the left one, is the original illustration. The image on the right is the one that was sold. Ignore the background, the image on the right is the final background. The important thing to focus on is the position of the two ships.

In my home I have framed versions of all eight of the posters still hanging on my walls. Well, seven of them hang on my walls. Proudly. The framed picture of the Rifter has never hung on my walls and never will. I have a lot of Eve art on the walls of my home, but I don't hang this one. The reason why is the reason why the ship isn't in the same position in those two images.

So let's back up a bit. I was doing a lot of learning back in 2014-15 about how to create digital vector illustrations. Every time I sat down to create a new spaceship illustration I would end up changing my technique a little bit here and there. Some of them turned out more successful than others. It probably isn't even something that most people would even be able to notice. But when it came to illustrating the 8 illustrations for the official posters, well those pieces got a LOT of extra attention. Maybe another 10-14 hours of attention. These were my babies and I wanted them to be perfect. And when a perfectionist tells you they want something perfect, trust me, they mean it.

But art isn't just about technique, it is also about many other things. Like composition for example. (There are others as well, but for this story, composition is key.) Each spaceship illustration gets placed into space in just the right way to tell it's story, to create the final piece of art. Sometimes I would sweat over these choices for a long time. (Just ask my Wife.) It's important. It's critical. And I know that might sound dumb, but if you were an artist you'd understand.

Thing is, as you've probably noticed by now, those two Rifters are not in the same position.

That's because, without my knowledge or approval, it was changed.

By the time I got the proofs back that showed the ship had been moved, well the process was too far along to change it. Perhaps I could have demanded that the presses should be halted and the Rifter be moved back? Maybe I should have. In hindsight I certainly should have. But I didn't. I didn't want to upset the applecart and throw the entire enterprise into jeopardy. I still held out hope for the Battleship Series and the Titan Series at this point. I didn't want to be the asshat who ruined the chances of those happening. Did I?

I was angry. I was mad. But I kept my mouth shut and moved on. The other three would be fine and, after all, maybe it was better like that? It wasn't.

The poster that needed some last second work done was the one for the Executioner. 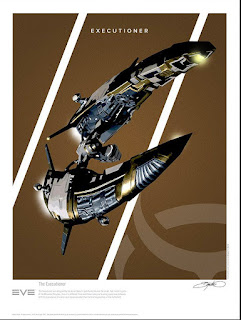 And now dear reader you are about to become privy to a deep dark secret that I've held onto for over six years. Trust me, everyone involved in this no longer works at CCP and has moved on to other things. So I thought it was time to finally come clean.

That's not an Executioner.