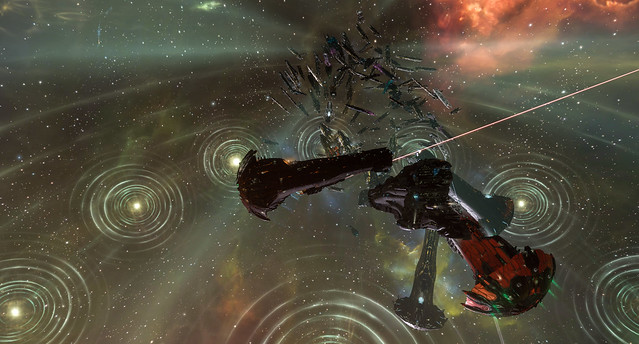 There are groups within New Eden that occupy special niches of their own creation, Signal Cartel, B4R, Bombers Bar, RvB, The Sixth Empire just to name a few. In many ways, Stay Frosty could also be lumped into that category. In ways we all exist solely at the discretion of the larger community within the game. To varying degrees we all serve various gameplay and lifestyle functions that are not only unique, but also create a much more varied and vital tapestry in the universe. I often think that without us, New Eden would be nothing more than a bunch of dick measuring contests.

Down in Basgerin the Sixth Empire carved out a special corner of the universe around a donated Keepstar known as the Popestar. A Keepstar Freeport in Low Sec, one of only two in the entire game. (I'm not sure the other one is a Freeport) Surrounded by a few other structures this complex allowed anyone access and provided a much needed base of operations for those not beholden to special Null Sec Allegiances. This served the greater purpose of the Sixth Empire, a non-aggression based group that takes in players from all over New Eden who are often in transition. The Sixth Empire is a player based group, not one with a navy, or one that exerts force.

Such a thing exists only because we all decided it should.

Except Snuffed Out and those associated with them. In a very special dick measuring contest this week Snuff decided to put the 6E Sotiyo into reinforcement. To see what the response might be. I believe some ransom demands were also a part of this engagement. The word went out around the community, the Space Pope wrote words, we sent out calls to arms, and last evening 1,400 players showed up in Basgerin to attack or defend the Space Pope.

To put it fairly, we all got slaughtered. Snuff brought 10+ Titans and over 20 Carriers and FAX onto the field. In addition it was extremely confusing as to who was on their side and who was defending. I'd estimate that the defenders represented about 200 different groups. And no one on the defending side was coordinating anything. In the mayhem that followed, often under crushing high TiDi, it was just as likely that the defenders were shooting each other as they were shooting Snuff.

You can see the BR here.

For our part ABA brought 15 Bombers down to try and help. We lost 9 of them. Having been a part of such events in the past I was loathe to commit more forces to the effort. As it turned out my instincts were correct. This kind of meat grinder does not favor small gang experts. To say the least.

A couple of stray observations. First of all the Eve UI is not built for large fleet engagements and I have no idea how people do this all the time. Add 90% TiDi on top of that and it's a real shit show. You Null Sec people can have your large fleet fights, I much prefer small gang and solo fights. Secondly there are many ways of looking at something like this. Some say that larger groups are always going to pick on smaller groups. And that is the way of things. If you had that many Titans and support to throw around you'd want to destroy the Keepstar as well. Possibly. That is generally the way things work.

This is Eve after all.

I don't know the answers. As a Bishop to his Holiness Max Singularity it was my sworn duty to defend yesterday. Which is what we tried to do. We lost. But I also think we lost more than just a fight. I think we lost something else which may be far more valuable.