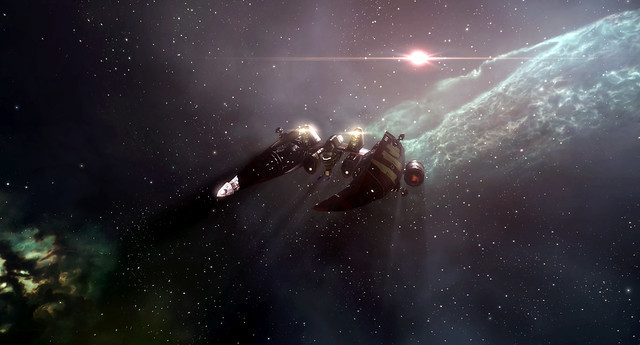 Behold the Imperial Navy Slicer. When you've been playing as long as I have you can see the various cycles, loops, and evolutions of various ships across time. A great example of this happening is the Slicer. As befits its name, the Slicer has always existed on the razors edge of viability. Right at the edge of point range.

Right now the universe is not being kind to this dart of a spaceship. More longer range options on the field have put a slight damp on it. From Trig lasers to Micro Jump Drives, more ships today have the ability to reach out further than at any other time in Eve's history. And while the Slicer remains a solid ship choice, it isn't as common as it once was. This does not mean it has lost any of its effectiveness as a PvP platform.  This month the Slicer is #7 on Stay Frosty's most used ship list. In fact that position is actually up from the previous two years.

So on one hand I'm telling you that the Slicer is facing increased difficulty on the field of battle, and yet on the other hand I'm telling you that our pilots are still using it (possibly more than they have in the previous two years) - so which is it?  Welcome to the world of low sec ship choices. And the ever increasingly difficult challenge of figuring out the meta while also working hard to counter that same ever-changing meta. It isn't an easy challenge. Add to it the variations of pilot skill, choices, environments, and rapidly shifting bonuses, implants, and drugs. Good luck with all that.

But it is those challenges that make Eve great and worthy of playing for decades. If it was easy it would also be boring. So why is the Slicer such a great example of these challenges?

No matter how you choose to fit your Slicer the point is always about speed. You're going to need that speed because the ship is thin. But worse it is also Amarr. Which means it will run out of cap at the worst possible moment and leave you without much needed power to do much of anything. It can be a very challenging ship to fly successfully.

But an easy one to fit. Beams or Pulse lasers in the highs. Point and prop mod in the mids. Stuff in the lows. Oh sure, there are a thousand variations on that theme, we even see some RR Slicers, Brawling Slicers, Shield Slicers, and some other weird variations around - but essentially it all comes down to Beams or Pulses. The rest just falls into place behind it.

I always leaned towards more tank. Others in Stay Frosty like to lean more towards speed and less tank. I prefer the tank version because I'm not the world's greatest kiter. I prefer in close brawling and scram edge fighting. Back when Comets were everywhere I used to have a tactic of starting out in a kiting position, forcing the Comet to change their ammo type, and then immediately burn in and brawl them to death. I got a lot of kills that way.

The Slicer is a fun ship to fly. Fights tend to be short, brutal, and exacting. Make an early mistake and you usually die. Make the right choices and you'll be the hero you always dreamed you would be.

Next up, the versatile Tristan.