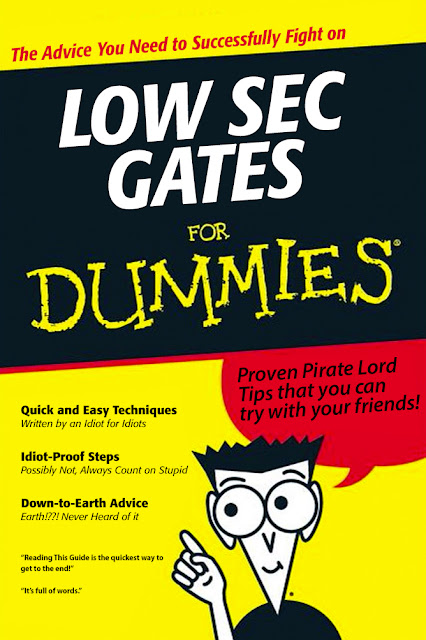 Way back in 2011 I wrote a series of guides based around the "Idiot's Guide" for various activities in New Eden. Back then these guides were mostly null sec based, because I was null sec based back then. You can find the 2011 version of this post right here if you want. The information is a tad out-of-date, but the advice is still good advice. Anyway, I thought it was a good time to update some of these. It has been ten years!! So here is the first in a new series of Idiot's Guides - Low Sec Gates for Dummies.

The Low Sec Gate. It looks like any other gate in New Eden, but it isn't. It has its own set of rules and issues, knowing what those are and how they operate can save your ship. Or allow you to explode someone else's ship. I make no judgement calls on which side of that coin you happen to be on. Whatever way you play, the important thing is knowledge. So let's review how Low Sec Gates work.

You warp up to them and then jump through into another system. Ah, tricky. But that sounds just like any other gate in high-sec or null. True, the gates themselves operate exactly the same as they do in other parts of New Eden. That's the easy part. The important bit isn't the gates themselves but the sneaky no good rotten things that someone put around those gates - Gate Guns! Yes every gate in Low Sec has guns on it, indestructible platforms that deliver bone-crushing damage when activated. The number of guns around a gate is determined by the Sec Status of the system you are currently in. Most Low Sec Gates have two or three of these bastards.

If you shoot a gate the gate will shoot back. And it has a range of 150k (which is warp to zero range, so it should be easy to remember) and it can deliver so much damage that it can often alpha smaller ships, like Frigates. So imagine a 150k sphere of death around each gate and you will be that much further ahead than those other idiots in your corporation. Gates will shoot you given the right excuse.

So, other than being an idiot and shooting a gate, what else causes them to shoot you? This all comes down to a word we call "Aggro" in the elite echelons of power. Aggro, or Aggression Timers, determine the mood of the gate you are on. You acquire aggro by performing certain tasks, like shooting the gate, or shooting someone else at the gate. This is the truly tricky bit - everything the gate thinks about you is based on your own Sec Status and the Sec Status of the person you are shooting. It isn't personal. The gate doesn't know you, all it knows (or cares about) is your Sec Status and what you are doing with it.

Let's start off easy here, because this can get complicated. Let's say you are a person who operates with a Sec Status of -5 or above. A positive sec status player type person. Anyone that attacks you on a gate will get an Aggression Timer that will cause the gate to start shooting them. (This happens off the gate as well, but that is a topic for another day) It doesn't matter what the sec status of the other person is in this case, aggression begets aggression timer. With one very important exception. If the other person is carrying around a sec status of less than -5 YOU WILL NOT GET A TIMER if you attack them. We call this the Bad Guy Exception (We don't call it that, I just made that up) and it is why you will often see Pirates telling other pilots they have to shoot first. If I shoot you first I get a timer, if you shoot me first, neither of us do. Make sense? (There are other timers involved here, but I'm trying to keep this simple)

Once you get an aggression timer the gate won't let you jump until it cools off. This is the same no matter where in system you got that timer, but it is especially important to remember on gates. Because you have no easy out, your back is against the wall. With a timer running, you can't just decide to jump anytime you want. You'll have to warp off, or stay and fight. Or survive long enough to run out your timer. (Which is called De-Aggro'ing) And now you know why so many fights happen on gates. Because it's fun!!

If you get shot at and don't shoot back, you can still burn to the gate and jump to safety. (Hopefully, unless they thought you might do that and have tackle on the other side. I once did this back and forth jumpy thing 18 times in a Battleship! My personal record, I ended up getting away) Unlike in Hi-Sec Concord will not show up in Low. So any help will have to come from your friends.

Other things can change, alter, or mitigate these actions. The presence of Logi can help mitigate the gate gun damage and keep ships alive even under gate guns. Links running can cause aggression timers. Etc, etc, but these are advanced concepts best left to another guide. For now, let's talk about the hidden gem in gate tactics - the forgetfulness of gates. Turns out these gates are stupid.

To keep this simple I'll use a simple example. Let's say I have a gang of three Frigates with me, no Logi, and we see a Battlecruiser on the gate. If we shoot it, or scram, web, or otherwise engage it -we will get gate guns. So what can we do? Luckily for us, these gates have short term memory issues. And while any engagement will result in timers we'll have to deal with, the guns will forget us if we warp out of that 150k sphere and come back again. So, if we are smart, we can take turns attacking this Battlecruiser, shoot, warp off, and then come back. The best part is that once we return we can engage without fear of the gates attacking us again. (Thank you Fozzie!!) We'll still have timers, but we won't have to worry about gate guns.

That works on Stations as well. And while we are talking about NPC Stations, just know that almost everything I've said here about gates also applies to NPC Stations in Low Sec as well.

There you have it. Again, this is intended as an Idiot's Guide and is not a comprehensive guide intended to answer your questions in detail. There are tons of resources if you are that interested. Knowing the basics is better than being stupid. And those are the basics.

I hope you learned something. What other Idiot's Guide topics would you like the Pirate Lord to address in an upcoming post? Leave a comment below and let me know.