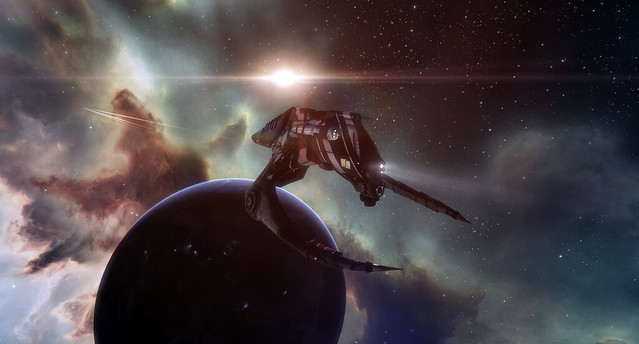 Almost ten years ago to the day I jumped into my first Daredevil.  As I've said many times in these pages, it just might be my favorite ship in the game to fly. Responsive, tough, and agile the Daredevil strikes fear into the hearts of men across the spacelanes. These days that fear comes from a different source than it did ten years ago. And that is a story all its own.

A month or so ago I FC'd a Stay Frosty roam of Daredevils and we had a blast flying them and scoring some solid kills in them. Especially in fleets of 20 the ship is insanely solid. To be fair, as we discover almost every week now, that same thing can be said for most ships in Eve. Our Venture roam last week scored a few solid kills as well. But the DD (As most of us call it) isn't a fleet ship, or even a gang ship, it excels at solo and very small gang engagements. That is where it shines.

Over the past ten years the meta has shifted a dozen or more times and the DD often gets either the buff or nerf end of those cycles. Horribly over-powered one minute and then horribly underpowered the next. Back and forth. Forth and back. That's the history, especially in our corner of the universe. Over that time the DD essentially broke down into two camps - the Rail Version and the Blaster Version. Typical variations on both, but essentially you either flew it with rails or blasters.

The rail version was typically my choice. Primarily because the blaster version was so prone to being kited, especially by the rail version. With the DD's famous web bonus you could easily hold other ships at range and apply good dps from a relatively safe distance. Especially if you could afford a faction web and a faction AB, the DD responded well to those modules.

That web bonus gave some people ideas. And those ideas quickly turned into the DD meta we see today. Dual webbed DDs with blasters sitting at zero inside faction war plex, waiting for their next unwary victim. Sometimes those blasters might even be polarized, for even more nasty. There are few ships that can slide into that plex and survive long against that onslaught. And it is a relatively easy way to play it, the plex limits the size of ships that can engage and sitting inside, with your finger on the d-scan, you can actively decide to engage or run away to safety.

This has resulted in fights being extremely difficult to get when flying a Daredevil. Over the past few years my time flying them has drastically decreased. The sight of a DD on scan in a system tends to cause people to seek safety. Sometimes I will fly it as part of a smaller gang of 3-6 pilots, because it does continue to bring a lot of utility to a fight - especially for a frigate.

But right now the meta is not being good for the Ship Without Fear. It has been pushed into a very small corner by those wishing to exploit its bonuses and the architecture of space in low sec. This isn't anyone's fault, this is just how things are at the moment. The Daredevil remains a solid frigate choice for PvP, if you can find a fight that doesn't end with you fighting seven other pilots.

And yes, I still name my Daredevils Murdock.