I started playing Eve the moment it became available on the Mac back in 2008. If it wasn't on the Mac I wouldn't be playing it. I know that statement makes a lot of you PC gamers reading this angry, confused, or upset and I'm sorry about that. But that is the truth. Of course, now that I've been playing for almost 13 years, if CCP suddenly stopped supporting the Mac, I'd be forced to purchase a PC just to play Eve. But, luckily, that isn't going to be a problem.

Speaking of problems, those first 3-4 years were nothing but problems. The Mac client was buggy as Hell, crashes, bugs, weirdness, and issues plagued those first years. I still believe that it never really actually worked properly and that many of my early issues with Eve play are a direct result of those issues. It got so bad that CCP seriously considered dropping Mac support, several times.

And then along came the Wine version, the Intel chip revolution, and all the changes to MacOS. The salad days. A more robust Mac client and far less issues, problems, and crashes. Not 100% perfect, at least in the early days, but so much better than it had been. And that has been the environment us Mac players have lived with for the last decade, give or take.

So now Wine will be going away and Eve will be running native in MacOS.

Right now you can experience it for a few days on SiSi and they are encouraging us to try it out. I logged on briefly this morning and was blown away. While I may need to mess around a bit with display settings or whatnot, I can easily run Eve at max settings and max resolution now and still play the game. At least that's my early impression. I'll have to dive into it a bit more over the next few days. 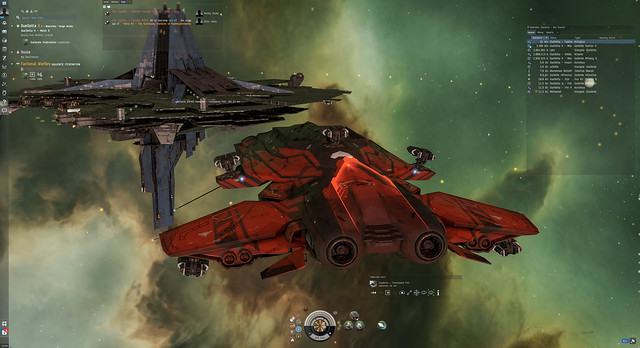 The above image is Eve running at full 5k resolution natively in MacOS in SiSi this morning.
If you are a Mac player I recommend logging into SiSi at some point and experiencing it for yourself. The more feedback the better.
update