Under the Weather Updates 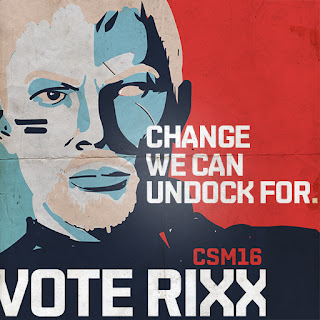 Got myself a nasty head cold this week. Nothing serious, but annoying and miserable all the same. Figures it would come along at the same time I had serious deadlines to meet. Messed up my schedule and the posts I intended to publish this week.

I haven't had a cold or anything since the lockdown started early last year and then get one after having taken the second vaccine shot. Figures. I don't believe those two things are related in any way. My second shot was almost two months ago. Still weird.

The campaign continues. Running for CSM is a bit like speaking in public inside of a box. I know there are people outside of the box, but are they listening? I dunno. Every so often someone will come along and whisper into the box. But otherwise. Unlike real world politicians we don't have access to any polling data, or focus groups. Heck, because of Covid we still can't even get together in public. All I have to go on is the feedback that I do get. Most of which has been extremely encouraging. Except for this one pilot in Tama yesterday who told me I'd be lucky to get 50 votes.

I'll consider myself lucky if I get any votes. My goal is to earn the right to represent my fellow Eve players on the CSM this year. All I can do is work hard, tell my story, and ask for your support. The rest is entirely up to the community. I'm not stupid, I know running as an independent is difficult. I have no major block support (yet!), tons of name recognition, and (I think) the good will of most players. On that foundation I think I can build a successful campaign. At least that is the goal.

I was on Open Comms and I have many more guest appearances lined up in the coming weeks. So that's good. I enjoy doing these shows, at this point it is the best way to get the message out, meet people, and openly discuss the game.

I was also going to host a public NPSI fleet this weekend. But because of my cold and the real world deadline stress - I've decided to postpone that until the following Saturday. More information will be available on this next week.

As always, you can visit my campaign forum post and show your support there.