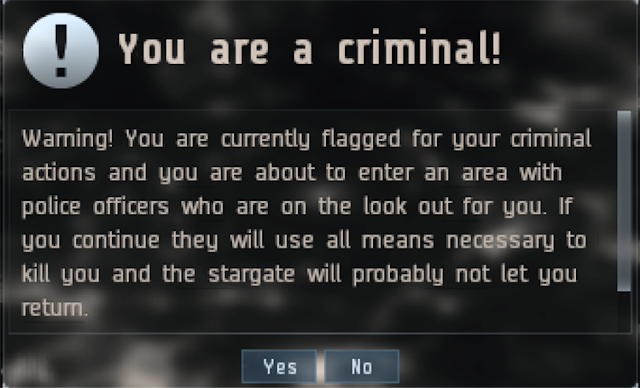 I've been playing Eve for 12.5 years now and there is very little I haven't done in this game of ours. I've written over 2,500 posts chronicling those adventures here in these pages. Wars, ganks, piracy, adventures, events, you name it. And yet yesterday, for no reason, I managed to do something new. I deliberately jumped into HS with a criminal timer. And got killed by Concord.

Now I've been killed by Concord before. That isn't new. Sometimes we get bored and will jump into HS to gank some poor ship just for fun. We don't do this very often and to be honest, we are pretty terrible at it. But Concord kills you for that. And way back in my early years I would often get on the wrong side of aggression or can looting while in HS and end up getting in trouble with the law. I've been webbed. Chased.  And otherwise pursued by the Cops. Heck, anytime I jump into HS I get the warning that criminals are not tolerated.

What I didn't appreciate yesterday was that I had just podded someone. We had jumped down to Genesis to protect a structure one of our corporations was taking down. When the can dropped some idiot in an Algos decided to warp in, so we killed him. And his pod. And then, mission accomplished, I just started warping home. And then jumped. It was then that I realized my mistake. My warp drive was shut off so I burned back to the gate, which was not working for me. And then I exploded. Sigh.

So I warped my pod to a safe and settled in to wait out the remaining timer.

It wasn't long before someone in local spotted me. Broodin Schereau of KarmaFleet University and I had a good conversation in local, and a good laugh at my own stupidity. He even spotted me a new fitted Condor to travel home in, which was incredibly awesome of him. Thanks Broodin! Much appreciated.

Dumb things happen. They are as much a part of the tapestry of Eve Online as the genius, brilliant things you might also happen to do. Over the years I've been extremely open about both here in these pages and I'm not going to stop now. Just know that even us old vets still make mistakes, ignore warnings, and get killed for being idiots.

But you never know when you might also bump into a friend and get a new ship. And that is, after all, what makes this thing so amazing.