This is the new A Band Apart video for Alliance Tournament XVII this November. It will air during the AT amongst all the other Alliance videos. This year the concept for the video came about rather spontaneously on our Discord. One of members, Link0n, even made a test version. And I did some quick trials on my phone as well. I remembered that my Son had one of those old Megathron models that I had bought him almost a decade ago. And I had a Mixed Dimensions Rifter model that would be perfect. So Friday night we went to the fabric store and purchased some green fabric, green thread and I built a small amateur-hour green screen studio in our basement. 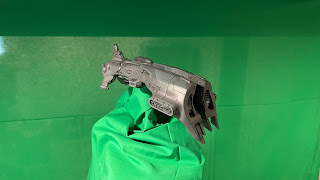 Sadly the Mixed Dimensions model fell a short distance and broke completely in half!! So I was forced to use one of our USB Rifters instead. Grumble grumble.

I had an idea of what I wanted, or at least, what I thought I could accomplish. Other than that I just shot a lot of video and crossed my fingers. A few really great shots never made it into the final. 15 seconds is not a lot of time.

And then last night I sat down and made silly sound effects and managed to get my Wife to make some Pew Pew sounds. I must have watched the final result a hundred times. It is either great or horrible, but most likely somewhere in-between. I can't decide. What I do know is that it makes the 12 year old science-fiction kid that lives inside of me very happy. And I think that ultimately it captures a certain essence about Eve Online that is rarely talked about - that childhood innocence of flying spaceships - one in one hand and another in the other. Pew pew!!

A Band Apart ABA AT Tournament AT17 ATXVII