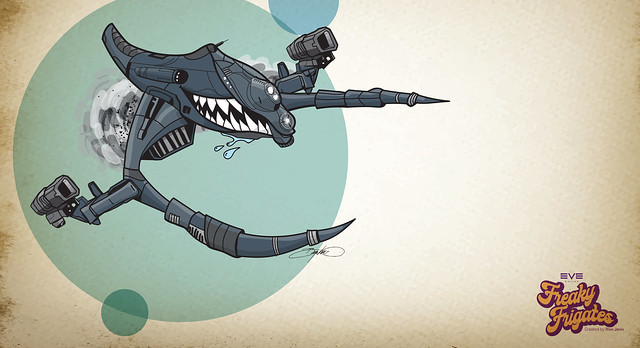 I've been creating Eve art since 2009. In that time I've created hundreds and hundreds of pieces that range from simple photoshop all the way up to hundred hour illustrations. I've release two completely free eBooks, created well over 1,200 Alliance logos, donated pieces to charities and in support of player causes, created tournament brands for Eve-NT and others, headers for community blogs, t-shirts for events, stickers, lapel pins, challenge coins, the CCP Soccer Team, internal CCP teams, CCP London, the list goes on and on. I've experienced professional milestones, like the 8 illustrated posters that CCP once sold thru QMXonline and signing autographs at the Harpa in Reykjavik. And I've experienced weird set-backs with Cease and Desist letters from CCP legal. And despite fighting for creator rights, and winning many battles (like the Alliance logo rights issues), I'm still unable to sell my own art like other artists are allowed to do.

Even though last year I was asked to help the Eve Store and I created the Freaky Frigates Collection. Which was the most fun I've had doing art in a very long time.

I sold my first piece of art when I was 12 years old. I drew a picture of Iron Man and some kid paid me $5 for it. I never stopped being a creative person, and I've made a career out of it. A rather successful career. I've done a lot of stuff in my professional life. And I continue doing stuff right now. I will until I no longer can physically or mentally do it, or I'm dead. That's just how it is. I can't stop.

So for me doing Eve art wasn't unusual, or some kind of weird revelation. It was just a new thing I became interested in when I started playing the game back in late 2008. Not doing any art based on the game would have been weird and unusual. So it was truly just a natural progression. Yet another fun way to express my innate creativity. It's like breathing. You can't stop. Neither can I.

Over the years my involvement has risen and fallen on the basis on real life commitments and other factors. There are only so many hours in a day after all and Eve was never going to be a career choice, or a money making enterprise. I never saw it like that, despite what some other players wanted to believe at various times throughout this journey. In typical fashion, people tend to believe whatever they want to believe, or whatever happens to be convenient for them at the time.

I do it because I love doing it. Even though right now is another one of those down times, because I have other commitments that are more important to me. But I won't stop. I just finished up another Alliance logo this morning.

And I'm still trying to carve out some time to help Ian with Clear Skies IV.

Or whatever happens to come along next.

Speaking of which, I gotta get back to work.