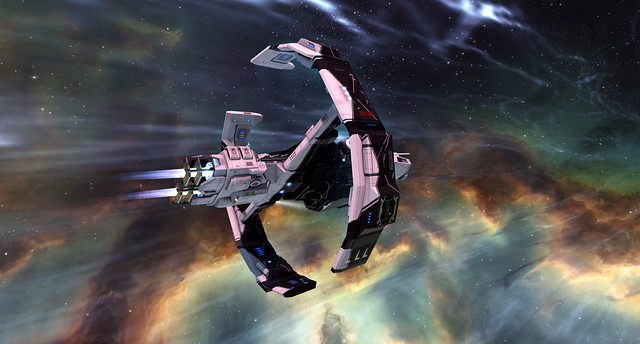 Yesterday I was finally able to put together a solid 90 minutes or so to log into Eve and undock. That kind of time is increasingly rare these days. It'll get better as time passes, these things tend to go in cycles and right now real life has increasing priority. I don't let these cycles bother me, I learned a long time ago to look at things with a longer view.

I did realize that for short sessions I've been increasingly relying on the Astero as my ship of choice. Over the Summer my game play became more and more solo based as server numbers dwindled and my available time to organize roams went to zero. The Astero is a great ship for flying around solo in when you are an infamous Space Pirate Lord. It might not suit everyone, but for me it serves as a solid platform. Ambush style works when half the time people are saying Hello in local, or asking when you are going to come fight their Kikimora, or mocking you for trying - those are the three most popular results behind the single most popular - the docking up and hiding option. So being cloaked helps a tiny bit. Which is why it is now second on my all-time kills list behind the Fed Navy Comet.

So I jumped into a Jaguar instead.

Yeah I like to mix things up and I hadn't flown a Jag in a very long time.  For awhile my prospects looked about the same as always, Hi Rixx, Come fight my Cruiser gang, Try Hard, or suddenly empty locals. Believe me, I'm used to this. And I know that patience is the primary goal, eventually opportunity will reveal itself. You just have to be in the right place at the right time.

Thanks to Joebane and Corvus yelling at each other on Tweetfleet, I knew that Fliet would be busy. So I went there. Along the way I managed to pick up Link0n in his Rifter.

I managed to find 4 pilots sitting inside a small plex and decided to go pay them a visit. One of them ran off, but I had a nice 3v1 going for a short time and then Link0n came in to help finish off the last of them. Was a lot of fun and they managed to do pretty well considering, they need more practice working together as a team. In some moments it almost felt like they were taking turns.

We flew around for a bit. Chasing things, trying to make fights happen. And then when he was chasing a ship in a novice, a Catalyst landed on me. Poor guy, but at least he put up a decent fight. I respect that.

And then we saw the Stabber on scan. Alone. And yes, we should have left him be. But the compunction is often powerful, so we decided to engage. You just never know what might happen. And the risk is, in my humble opinion, well worth the potential reward. We died. That one didn't work out.

So I went home and tried a few more ships and a few more things, but eventually just wanted to end the night on a positive note. So I jumped back into my trusty Astero and started canvassing the neighborhood. I was alone again when I spotted three Frigates in a plex together. Then just two. Then a Punisher, which I managed to catch and pop. Another good fight. And then two Kestrels together, I only hesitated for a second, before plunging into them. Again, these guys need to learn how to work together better with the webs and applied damage. Hopefully they enjoyed the fight as much as I did.

With that I called it a night. All in all a good evening of Yarrr. And it looks like things are finally starting to pick up again.