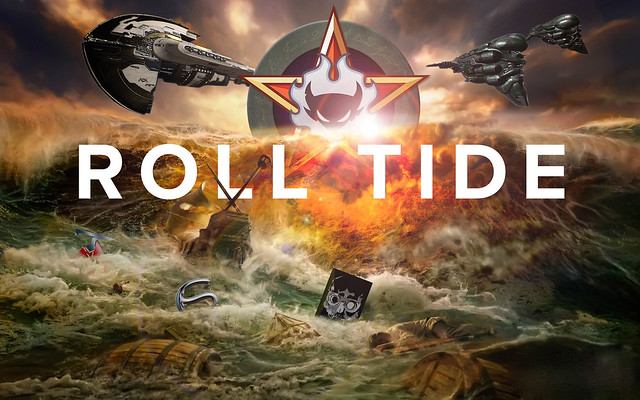 Between my new job, which at over two months now I guess isn't so new, and the Alliance Tournament practice schedule - there hasn't been much time to do much else. If you've never been involved in preparing for your team competing in the AT, you probably can't imagine just how much work is involved. It isn't just developing fleet compositions, fits, and tactics - then testing those against other teams in practice - then changing those again and again based on what you learn... ok, it is mostly doing that every single week. Sometimes twice a week.
Up until about this week our plan so far has been what I call the Spaghetti Phase where we throw a whole bunch of assumptions, prior experience (which changes every year), and weird combinations against a wall to see if they will stick.  A lot changes in Eve every year between tournaments and it can take some time to figure out what those changes mean based on the point changes, rules changes, and turn-over on the team itself. All of which combine to make the process rather intimidating, time-consuming, and often frustrating. For me and our pilots.
This is normal. It happens every year. At some point you transition from Spaghetti Phase into Roll Tide Phase, which is when everything starts making sense, the dumb questions stop, and everyone starts flying like a team. We're almost there. To help things along we decided to participate in the practice open this weekend that Eve-NT is hosting. Normally I wouldn't do that, but I think our team could benefit from an approximation of the tournament environment. So we'll see how that goes.
Every year I go into this thinking, "This is going to be the year when it all makes sense." and that never really happens. There aren't any shortcuts, not if you want to try and compete at a high level. Which remains our goal, even if we don't always manage to achieve it. And yes, I'm talking about my own failures here. Sometimes it might seem like a good idea to bring a armor Rattlesnake comp - but it isn't. Trust me.
It's a grind. But it'll be worth it if we manage to put together a decent run in November.
Lots of work remains.
Alliance Tournament AT Tournament AT17 update