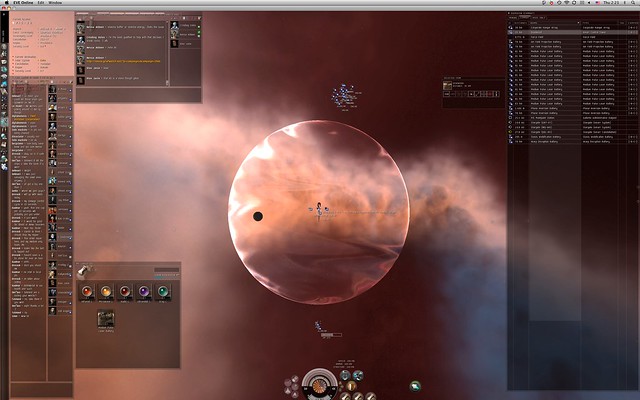 Just looking at that screenshot from 2009 brings back a lot of memories. The POS was named "Deadwood" after the popular HBO show of the same name and it represented a very weird confluence of events in my early history in Eve Online. A history that, I freely admit, is becoming more challenging to remember as time slowly continues to pass.

This would have been July 2009, Dusty Death Enterprises was breaking up and Angor and I had decided to once again try to form our own Corporation. Just a few months earlier and our High-Sec mercenary corporation "Inglorious Basterds" (Lots of Tarantino in my Eve career) had folded and we had come back to Providence and re-joined Dusty Death just as it started to explode in glorious fashion. FloridaJ had stolen most of the corp assets and run off to parts unknown. These were weird times, what can I say? It's weird to me, looking back, just how impatient we were in those days. Desperately looking for a place to hang our hats, while so many great choices were around. We didn't make many great choices back then.

A huge part of that was my desire to just play the game and pretty much let my Son do whatever he wanted. Back then I was mostly just a Dad who wanted to play video games with his Son and share in his adventures. There wasn't much more to it back then. I enjoyed playing Eve, but those first few years it hadn't yet become MY game. It was still OUR game. Nothing wrong with any of that, but it made for some interesting and impatient game play. And probably a significant amount of head scratching for those we got involved with.

So we named the new corporation Brutal Company and, as part of the sov back then, we had to put up a deathstar POS for the alliance Libertas Fidelitas (LFA) which was part of ProviBloc back in those days. Brutal Company lasted for 15 days. One of our few pilots stole most of the POS and ran off to High-Sec with it. The stick and a few other goodies was saved, but lost in transit when Angor tried to get them to High-Sec. The POS represented our entire savings. We were broke, again.

What followed was a crazy back and forth few months until we finally landed back in Providence again for another year or so.

I wonder how many of those pilots in that screenshot are still playing Eve today?

I looked them up and it looks like 3 of them are still somewhat active. Excluding me of course. That's better than I thought.