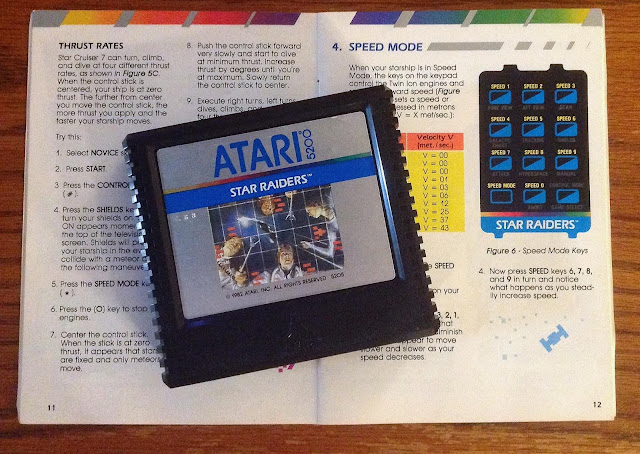 {This article originally appeared in December 2011}
I'm going to date myself horribly in this post. Way back in 1979 when it came to video gaming the Atari system was all the rage. The Atari 2600 was the coolest thing you could own and one of the coolest games you could play was a game called Star Raiders. ( Asteroids was fine, Space Invaders was popular, but for my money Star Raiders was better. Oh and Defender was awesome too! )
The more I think about this game the more I've come to realize the direct lineage between it and Eve. And while SR was four-color 8-bit and cheesy by todays standards, the game-play and strategy sounds awfully familiar.  Let's take a closer look.
While SR was the direct ancestor of today's first-person shooters, other aspects of the game can't be ignored when considering its Eve heritage and inspiration.

Consider the "Galactic Chart" pictured here. Each square represents a Star System. Your ship could fly around each star system in sub-warp speed, but to get to another star system you needed Hyperspace. You selected another system and jumped to it, much like our Eve Gates today. Some of these systems even had Starbases in them, which you could use to repair your ship.
For those of us alive at the time, the sight of the SR Hyperspace warp tunnel in store monitors was extremely common. Video stores would run loops of the warp tunnel effect to showcase the graphics of the Atari. But the similarities don't end there.
The whole point of Star Raiders was combat. And to aid you in that combat you had radar, in fact you had two types of scanning, short and long range. This "overview" type system also let you know when enemy ships were locked and ready to be fired at. There was even a primitive version of tracking to enable hits on the bad guys.
Unlike many of the multiple lives games out at the time, in SR you only had one life. One ship. Your ship could be damaged by bad guys, by collisions with asteroids ( or Meteoroids as they called them ) but could only be destroyed when your shields get low or won't work. In fact, multiple damage types could hurt your ship in different ways, shields, weapons, engines and even your overview could become damaged. ( something even Eve doesn't have )  You even had to manage your Cap ( Energy reserves ) to effectively stay in business long enough to keep fighting.
Oh wait. While you could dock at Starbases for repair, the enemy could also destroy your Starbases. If they surrounded one and you failed to defend it, it could be blown up and lost to you. Sounds kind of familiar doesn't it?

The picture to the right shows the screen view of a Starbase and the shuttle you used to dock with. You can see the ship information along the bottom and the "overview" on the right.
The entire game took up only 8k of ROM and worked with only 8k of RAM. A far cry from today's system requirements huh.
Understand, I am not saying that Eve is a rip-off of Star Raiders or anything nutty like that. That would be silly. But anyone can see the direct lineage that today's games have with those that came before them. Star Raiders isn't the only game on that tree, but it is probably the most significant example and truly the Great-Grandaddy of Eve.
For me personally, Star Raiders represented the first time I had played anything remotely like a real, immersive ( for its time ) space game. It wasn't the arcade classic Asteroids, or Space Invaders, in which you were displaced from the action by the screen. Star Raiders was unique for putting you into the action, it was first-person before first-person was even a concept.
And it planted a seed in my young brain that became fully grown when I saw Eve for the very first time. And for that, I thank you Great-Grandfather. You rock.