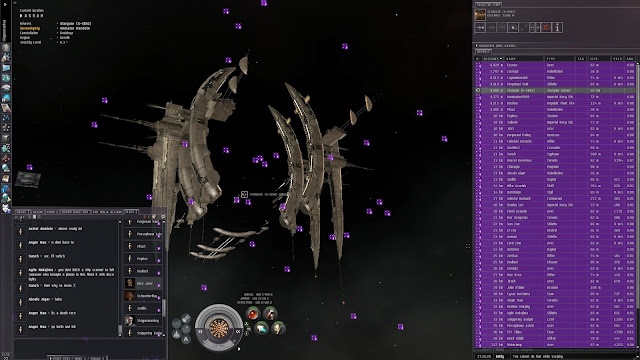 This screenshot was taken on August 22, 2010 in Assah on the gate leading to Providence. This was the start of my very first in-game event - The Deathrace. The idea was pretty simple, get a bunch of people together in fast ships and race thru Null Sec from one HS gate to another. I ended up holding four Deathraces over the years, the last one was held when I was with the Tuskers and we had nearly 400 entrants in that one.

As much fun as Deathraces sound, they really aren't that great. So much is out of your control, from the route itself, to ship fittings, wormholes, and continued changes to warp speed. As well as local activity, such as bubbles, camps, and other factors which you have almost no control over. By the time the last Deathrace came around I had to engineer a gate camp just to make things at least a tiny bit scary. But then you are giving some people kills, while other people are being killed. And no matter how you spin that, it kind of sucks to get killed at the end of a race.

Which is why I started holding FFA events instead. While the upcoming event is the 8th one that Stay Frosty has hosted, it is the 12th FFA that I have hosted. Three while I was in Tuskers and another one before that. Like many players, I served in Corporations that would often have internal tournaments among the players. We've had Rookie Ship tournaments, Frigates, and other types over the years. It was these that gave me the idea to expand the event and bring players together.

Those early years were tough. We didn't have multi-fit back then and often we'd have day long fitting parties where we'd all sit in station and manually fit up hundreds and hundreds of ships. Back then I would try to hire or partner with other groups to provide "security" for the events, to help keep people from gate camping, or hotdropping the events. But as time wore on and these events got bigger and bigger, I realized that having hundreds of people in Frigates in space at one time - well that was security enough. But beyond that the most important thing was just how much fun people have at these FFAs. Soon enough all of our neighbors stopped wanting to hot-drop the events and instead - participate in them. Because everyone wants to let their hair down every once in awhile and just have fun.

And this year's event looks to be the biggest one yet. Twelve years of running events and I still get nervous, still worry, still hope everyone enjoys themselves. And still strive to put on a great show. Mostly I want to keep doing these to help players understand that PvP in Eve is fun, exciting, and incredibly challenging. And nothing to be afraid of. Come join us for six hours of mayhem, the ships are free, the fun never ends, and no matter how old you are - you might just get in on a Dread kill! Or, who knows, maybe a Rixx Javix kill if you are lucky. Or may even one of your favorite CCP Devs will show up?

Man, this is gonna be nuts.