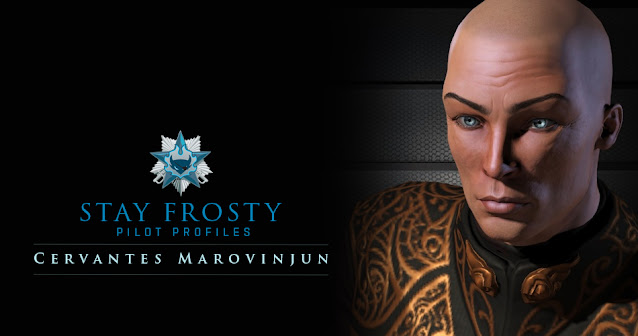 Introducing a new feature here at Eveoganda - The Stay Frosty Pilot Profile Series. Over the course of 2022 I want to bring more of our pilots to your attention and highlight the wide variety of players flying under our banner. I'm constantly surprised and thrilled by the sheer variety of background, philosophy, and style that each of our pilot players bring to the universe. There is no single thing that all Stay Frosty pilots share, other than a genuine passion for PvP, and no pilot deserves to be our first profile more than my good friend Cervantes Marovinjun. Who I refer to as Cerv. Which is what I will be using in this post.

First a little background, Cerv currently holds many records in our Corporation. Including the all-time leader in kills for the Corporation with more than 11,000 kills under the Stay Frosty banner. I suspect he also leads the board in many ship categories, he is currently sitting at 6th in all of Eve flying the Imperial Navy Slicer for example. You can visit his killboard and check them out for yourself. But statistics only tell part of the story. Cerv has been part of the Stay Frosty family for a long time and has contributed greatly to our Corporate philosophy, even though he might not always be aware of it. He is often my sounding board for ideas and I value his opinion greatly. There are players that I can count on to help keep me flying in the right direction and Cerv is certainly one of them.

But how did he get started in Eve Online?

"Back in 2003, my brother introduced me to Eve and I joined his Corp right away. We moved to Fountain, where we mostly mined and hunted NPCs. Eventually part of the Corp formed a small gang PvP group, which was my first PvP experience back around 2004, flying mainly Frigs and Cruisers." he explained. "After that I joined Faction Warfare when it was released for a while, it was very popular, with multiple large fleets all over. Then I spent a year or so in Null down in Curse. And joined RvB for a year or so, mostly flying solo and getting into shenanigans."

But how did you get into Piracy?

"It wasn't until I ventured into Black Rise, in a Slicer and got 12 kills in an hour. It was then that I decided, this was going to be my new home. I eventually found Stay Frosty, and I've been here ever since. I don’t consider myself a Pirate by the way, just a PvPer." Just a PvPer he says, "I’ve lived in all areas except Wormholes which I’ve recently started to explore more widely. But no matter where I travel LowSec really suits me best."

Yeah well how come you are so much better at flying Slicers than I am?

"I’m not sure that I am. I’m in the top 10 Slicer all time pilots, but I've been flying a Slicer since it came into Eve, and have flown them for it many years. As you well know, the only way to get good at anything is to practice. I got to know Slicers inside out, learned to kite, this was when I realized, I could fight multiple ships at a time, as I could stay out of their range, while applying my own guns. This experience totally changed my view of Eve combat, and opened my eyes to new possibilities."

Anything else you think people should know?

"I love helping people to learn PvP, and how to fit ships properly. It's been great to see people in our Corp grow, learn to solo, and watch their journey from losing most fights to being feared in local."

I have to agree that helping pilots and watching them turn into solid PvPers is one of the greatest things about flying in Eve Online for me as well. Cerv has helped me tremendously over the years, even though we disagreed slightly on the best Slicer fit years ago. It all really came down to how we both fly our ships, which is just another great lesson - not all good fits actually fit the way you fly. Learning enough to make that distinction is a sure sign that you've become truly one of the great pilots in all of Eve Online.

I'm proud to fly with Cerv and anytime we are in a gang together I immediately feel like a better pilot.