Skins on ships have been around a long time now. We've got purple, pink, and holographic displays, smoke, fire, and all sorts of themed skins - but what we don't have is a single set of Shark Teeth skins! And that really, really needs to change. 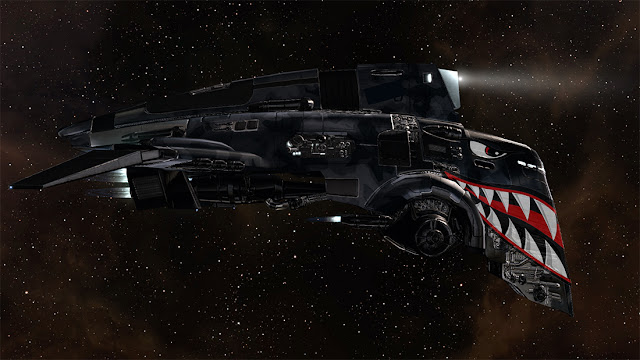 Now, just to be clear I am using Shark Teeth as an example of something I think is missing in Eve. Don't get me wrong, I love the idea of Shark Teeth for certain ships. But I also think it is time to loosen up a little and give us some Tribal, WWII Bomber-style, Fighter plane, Skulls, Crossbones, and beautiful pin-up style skins for our ships. And I really believe this kind of idea is a potential money maker for CCP. I'd buy them. And I bet a lot of us out here in the real world would shell out some hard-earned cash for something special like that.

I love the skin on the Dramiel that gives the arms fire! That is so cool. But I would totally fly that ship more often if it had Shark Teeth on it!! Or a screaming skull. Or bones clutching a pack of Ammo!! Or a skull on FIRE! I mean, c'mon. Sky is the limit.

And for those that might be thinking it is all a bit much, just think aviators and pilots of the past and how they treated their airplanes. That's us.