That Time I Went Nuts 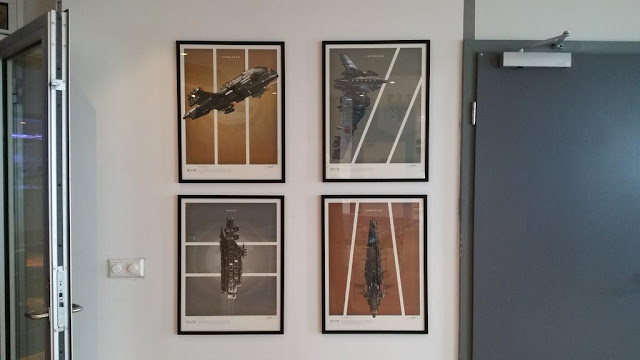 Back in 2014 I suddenly found myself with some free time on my hands. This wasn't a choice I made on my own, but life had conspired in a perfect storm against me. I won't rehash the sordid details here, suffice to say that when your business collapses, you go bankrupt, and you are in the middle of the most horrendous one-sided divorce in Western Pennsylvania history, things can get a tad bit stressful. And for anyone that encountered me back in 2014/2015 you have my sincere apologies. I was not myself back then. I had a lot on my back. I'm not making excuses, I did the best I could, but still. Tough times. Which, by the way, are now firmly in the rear view mirror. So thank you to all of you that supported me during that challenging time. You forever have my gratitude.

Enough said about the Dark Ages. One side-effect of me having so much free time on my hands is that it resulted in one of the most insane creative outbursts that I've ever had. Not only was I creating videos, alliance and community logos, and other materials for the Eve community - I was also trying out some long-gestating techniques. One of these came about from a suggestion from a friend that I create a mural for a project he was doing. My mural would be one of three that would get painted on some old brick facing buildings on the South Side of Pittsburgh. The project never happened, but it did start me down a road which led to me creating over 164 vector illustrations of Eve spaceships.

You can see the entire collection here.

I started doing these to solve an issue regarding size and ended up creating a whole new understanding about how to "paint" objects in Illustrator. Which formed the foundation for training myself how to better paint in Photoshop. This is why I started doing these. And once I started I just wanted to get better and better at doing them. I had zero goals in mind other than using the opportunity to create and learn something new for myself.

Somewhere along the line the series started getting some attention and several creative sites started picking them up outside of the Eve community. And that's when things started exploding. I realize that for many of you reading this, this tale is already a familiar one. But please remember that Eve is a rotating door and many of those reading these words are not already familiar with this story. I've been re-sharing some of these pieces on Twitter recently and it occurred to me that many players and potential readers may have never seen this collection before.

Long story short. Eventually CCP decided to work together with me on bringing some of my work to the larger community. At first this was all about re-launching the Eve Store and getting my art on t-shirts. But that evolved into a series of four posters (which you can see above on CCP's office walls) that they sold thru a company in CA. We ended up doing two series, one of Battlecruisers and one featuring Frigates. In 2015 they were sold at Fanfest and they sold more than any other item in the store. And I got to sit at a table and sign posters at Fanfest. 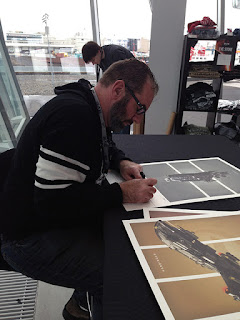 That moment, sitting there and signing my posters and talking to Eve nerds about them - well that remains one of the best moments in my entire career. Better than any award I've won, or any recognition, or celebrity I worked with. It was amazing. And it was made even more so because things were so difficult at the time. Because it was unexpected. Because of how weird that journey had been.

I was slightly crazy, maybe a little bit nuts back then. I can't imagine cranking out so much work in such a short period of time today. Some of those illustrations took 40 hours or more! That's insane. And to top it all off that was my very first Fanfest. My first time meeting any fellow Eve players, or Devs, or anyone related to Eve in person. My first trip to Iceland. My first player presentation. All on a dime I didn't have at the time. Nuts.

But crazy in a good way, right?