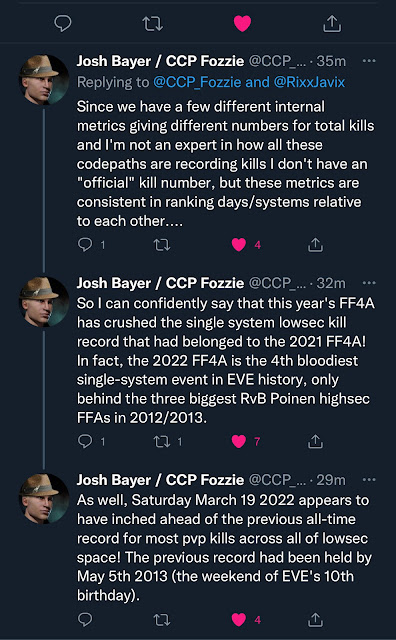 "Since we have a few different internal metrics giving different numbers for total kills and I'm not an expert in how all these codepaths are recording kills I don't have an "official" kill number, but these metrics are consistent in ranking days/systems relative to each other.... So I can confidently say that this year's FF4A has crushed the single system lowsec kill record that had belonged to the 2021 FF4A! In fact, the 2022 FF4A is the 4th bloodiest single-system event in EVE history, only behind the three biggest RvB Poinen highsec FFAs in 2012/2013.

As well, Saturday March 19 2022 appears to have inched ahead of the previous all-time record for most pvp kills across all of lowsec space! The previous record had been held by May 5th 2013 (the weekend of EVE's 10th birthday)."

Wow. The 4th bloodiest single-system event in Eve history! And the single day record for most PvP kills in Low Sec! Ever.

Obviously these records are amazing, awesome, and incredibly humbling. Breaking records is not why we hold this event, but I will admit that they do speak to how successful it has become over time. So for that reason alone, I have to admit to being pleased. Low Sec doesn't always get the kind of limelight that other areas of space get regularly, so for those of us that call it home - we do have a tiny chip on our shoulder. So this kind of news does help. Low Sec is fantastic and I love it. As you probably already know.

We are already talking about ways to improve the event for next year. Obviously there is only so much we can do alone, as anything more starts to bump up against the mechanics inherent inside of Eve. And while I certainly appreciated CCP's desire to help us promote this years event - and let's be honest the support was unprecedented and welcome. I'm not sure how committed they'd be to some suggested changes that could really help make this something special. But, as I've learned over and over again, there is no harm in asking. So here are a few changes/suggestions that would really help.

• A system storm, probably one of those awesome snow effect storms (for Stay Frosty) that makes ECM Bursts and Smartbombs use 9000% capacitor. Imagine this event without ECM bursts or smartbombs!

• Some kind of system wide announcement alert that can either be pre-programmed beforehand or used live by the event organizer - I dunno about that one but I am also not a game designer. It would be so helpful to point players in the right directions, even as a slight learning tool for new players.

• Possibly some type of Event Contract System that runs from a pre-determined in-game time frame that would allow players to access assets like Free Frigates one at a time from a pool of available assets. This way humans wouldn't have to 'hand-out' ships individually using trade windows, but participants could access those ships themselves from designated structures. Again, I'm not a game designer, and I do see some potential issues, but I think those could be managed by time and place constraints.

As a new player event the FF4A is challenged, no doubt about it. As an awesome PvP experience unequalled anywhere else in Eve - we obviously killed it. I'd like to see us do more to improve the experience for younger players but I'm constrained by reality and resources to figure out ways to make that happen. Hopefully in the coming year we can come up with some additional creative ways to make that happen.

I'd also like to put that challenge out to the larger Eve community and ask for your creativity as well. This event was never intended to be the exclusive of Stay Frosty and A Band Apart, over the years we've had many partners from other groups - Noir, Shadow Cartel, Brave, Eve Uni, and many others. I'm more than willing to share the spotlight as long as it makes sense, works within the positive nature of the event, and helps more players experience PvP in Low Sec.

Anything that I can do to help make this event even better - I will do.

Until next year and the 9th Annual FF4A!!