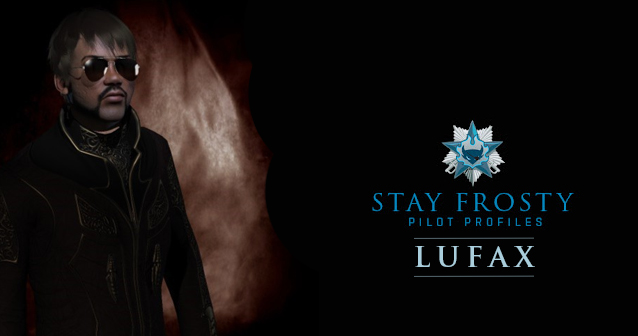 This is the second in a new series of pilot profiles showcasing some of the pilots in Stay Frosty. Our first profile featured Cervantes Marovinjun and can be read here. When it came time to select the pilot I wanted for our second feature only one name came to mind, my good friend Lufax. We've flown together for over seven years now and there are few pilots I respect more in Stay Frosty than him. He is a constant and a great sounding board, advice giver, ship fitter, and tactician that understands the complexities of spaceship interactions. As much as anyone can. You can check out his killboard for yourself.

Lufax often FCs our Wednesday Null Sec roams and can often be found splitting his time between Low Sec and Null. He is 5th in all of Eve for kills in a Vigil Fleet Issue and it remains the ship he has scored the most kills flying, but like most of our pilots he is just as adept in many other ships and situations. We often tease him that most of Eve is simply filled with his Alts, but if I ever need a sounding board, or advice, he is one of the people I turn to the most. He truly understands what it is that Stay Frosty stands for and why it is so important that we continue to maintain Piracy in Eve Online.

How did you get started in Eve Online?

"I was playing Wow and a friend and I were in Dalaran (town in WOW). He told me 'Lufax, there is another game with spaceships, it’s huge, fantastic and a lot of other superlatives'. I played for a bit, joined a French FW corp and had fun, but then real life took me away from the game. About 2 years later I restarted playing again and have never stopped since. Eve was for me mystical, huge, dark and unique, like a challenge. I remember thinking that Eve was a very eccentric game, the game of games, and I still believe that it is. I also played Elite as a child and Eve is a lot like Elite but with real people in it, that was a big thing for me. I have never been good at computer games so succeeding in Eve was great."

How did you get into Piracy?

"It came very natural to me. After all I have a pirate tattoo! But it wasn't until I joined Stay Frosty that I truly became a pirate. I love to PvP."

What is it you enjoy the most about Stay Frosty?

"The people in it. I got kicked from Waffles because of inactivity, so when I heard about Stay Frosty and your way of seeing things, I knew immediately that this was for me. Seven years in now. I had gamed a lot when I was younger, but as an adult never really found the time. And I remember that I wasn’t very comfortable with comms and such, but in ABA everyone was very welcoming and I immediately felt at home. I thrive if I can do things the way I want. I consider Eve a game, a place with no real obligations. I mean it’s for relaxing, not for working. In Stay Frosty we have no real obligations and I like that."

What should people know about you?

"I like to contribute, FC roams, create content. I engage in really stupid fights. I am mostly in it for the fun. And still trying to forget how my Nano-Megathron solo roam went…"

Why are you so much better than Rixx at flying the Vigil Fleet Issue?

"Well maybe?  I fly it a lot. I Love that ship, it is quite underrated, yet so versatile. As a good friend of mine would say: speed and rockets! Nothing better."

I especially enjoy hearing about how different players found Eve and then found their way into our Corporation, it is always an interesting perspective. It just goes to show you that one of the best parts about Eve Online is the variety of people involved, from all walks of life, backgrounds, and interests. Stay Frosty is many things, but it is also an amazing melting pot of culture, opinions, and people. How cool is that?

When I am in-game and join a fleet with Lufax in it, I know something good will happen. Even it might end in my own explosion, I know it'll be fun.