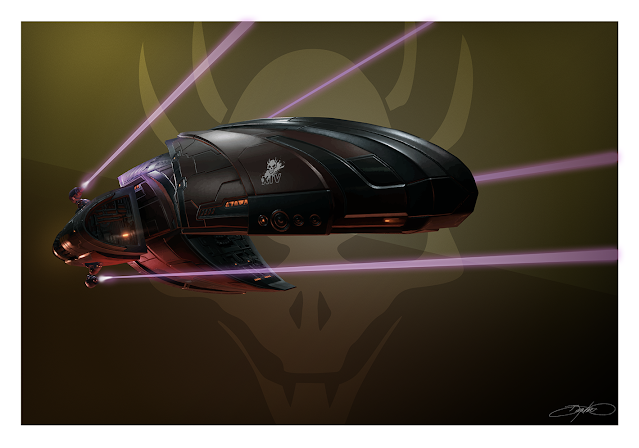 I can't speak for anyone else, but I look for inspiration and motivation anywhere I can find it. A new way to fit a ship. A creative fleet composition. Another milestone. Whatever it takes to wring some meaning out of the experience of logging in every day and undocking to scare people in local, bring terror to the masses, and eventually get blobbed to death. Y'know, the grind. I love it.

Recently I noticed that I was very close to reaching a milestone. I was sitting just short of 4,000 total Frigates killed in Eve. For the past few weeks that has been in the back of my head as I went about my business. Such knowledge doesn't change anything inside the game for me, at least not until it gets very close. Yesterday I noticed it was just two kills short.

So I decided I would choose the Tormentor as my ship of choice. Only fair to use a T1 Frigate to reach this milestone. Mostly that decision was made after bringing my Kikimora home earlier in the day after the roam Wednesday night. As usual I stopped along the way and exploded a Condor and a Comet with it. Which would have been 4 and 3. Now only two kills remained, so I undocked in my Tormentor.

I'm leaving something out. I actually undocked in a Comet first. And that's when I noticed the Retribution on scan. And while some might say I am nuts, that is a fight I will take every single time. And it was a great fight, down to the wire. And we both exploded! The funny part? Because I had been on a roam the night before which went into Null Sec, I didn't have any implants in my head. Nothing. I had forgotten to switch clones when I got back home. If I had my regular implant set actually in my head I would have won that fight. Oh well. User error. No one to blame but me on that one.

Well first Lufax found a Thorax belt ratting. So we had to go help him with that one. Nicely fit Thorax, but no match for two angry Frigates.

Then I had a run-in with a very interesting player flying an Atron. He engaged me on a gate, which is amazing and almost no one does that anymore. I love when people engage me first. It usually means they have no idea who I am and typically we manage to have a good fight. Of course sometimes it is a tarp, but that comes with the territory. In this case this player's major weapon was his mouth. You see my Tormentor doesn't have a scram or a point. So he just flew away when I was two volleys away from killing him. And then I had to listen to him in local for the next - what seemed like hours. I get it, you got away from me. Well played. That doesn't make you Bob's gift to PvP.  Anyway, I digress.

Next I had another great fight with a Rifter. Any fight in the Tormentor is going to be close if the other pilot decides to fight it out and this was no exception.

So now I only needed one more. And that's when I saw the Comet on scan. Now normally I would avoid engaging Comets in my Tormentor. Comets can be rough especially when they are already inside a plex. But I was looking to break another milestone and a win against a Comet would be a nice way to do it. So I slid into it.

If you are still reading you may be wondering, "Rixx, what do you do in such a situation?" So let me share a bit of knowledge. Odds are this will be a blaster Comet, which most likely means he'll be sitting near the beacon when I land inside. It is critically important that I gain range on him. He hasn't left the plex yet, so that means he's waiting for me. He knows I'm out there. And he is feeling confident, which he should be. Remember these are all assumptions. For all I know he is feeding his cat and afk. So I pre-heat two things before I slide - my AB and my Rep. He'll be close, so no need to pre-heat the webs or the guns. I'll need those after I know his range. My first goal is range, so that comes even before locking him up. I need those precious few ticks of safety to get moving.

And it all worked like clockwork. He was close, he was blaster fit, and he was waiting on me. The first few rounds hurt, but I was ready. And eventually I did pull range because I have two webs and an OH'd AB. After that I just need to survive his drones and volley the heck out of him from OH'd web range, right on the cusp of 11-12k.

And that was the 4,000th Frigate. He asked to be podded, so I sent him home with a good fight.

I sent him a note letting him know he was my new milestone and he promised to keep learning and try to avoid becoming my 5,000th. So I also sent him 50m isk and my well wishes for a long and prosperous Eve career.