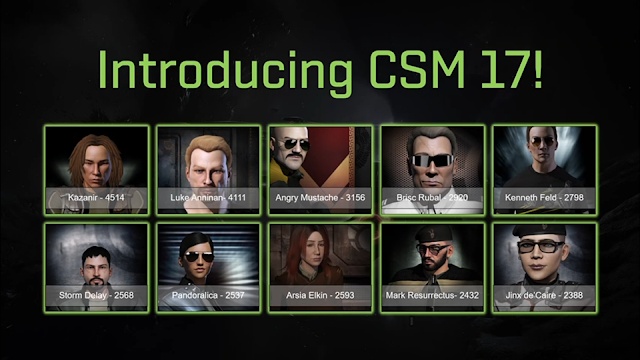 I docked up in Hevrice yesterday and watched the results of the CSM17 election on Twitch. Things went almost exactly the way I figured they would, although I was slightly off when it came to predicting the impact the Null Blocs would have this year. I thought 4 candidates would start us off and instead it was 5. In total 8 of the 10 candidates elected this year are from Null Sec. And while I was pleased that three candidates from my ballot did get elected (and sincere congratulations to Arsia, Mark, and Jinx), I was disappointed we couldn't get another LS candidate on the team this year. Y'know, because Low Sec/FW is the entire focus on CCP development and all. Oh well.

Please do not get me wrong. I actually have nothing personal against a single person on the CSM. In reality I have nothing negative to say about any of them, even those from Null Blocs. I really don't. Let's not confuse ourselves and tie things into a knot when there is no reason to do so. Every person on the CSM will do their best to represent the players and it is extremely important to keep the role of the CSM in mind. This is a focus group first and foremost. As such, the balance isn't that bad. Except, in reality, 4 or 5 of them would be from HS.

My efforts are on behalf of Low Sec and the people I play with in Eve. Just as others are concerned about their corners of the universe. That doesn't mean I don't care about Wormholes, or Pochven, or the Outer Passage. Of course not. Because I do care. And so do those that got elected. So let's be clear about that. If anything the last 14 years of playing this game have shown me that almost all players care about the same things - Eve's survival and growth. We all want it to do well. We just might disagree about how it does that.

Organizing and "getting the vote" out are built into Null systems. This is why so many candidates come out of those systems. The rest of Eve outnumbers them, but we are a fractured, independent minded, and often contentious group of un-organized and lazy players. This was my conclusion after running for CSM last year, it just didn't matter. Appear on enough Null Bloc ballots and you are essentially guaranteed a spot. And while some would like to argue that conclusion with me, the truth remains. And once again we saw that truth in action again this year.

I came close last year. This year Ithica came very close. Phantomite and others also did well and had a strong showing. But we fell short once again.

I wish all the elected candidates the very best. I hope you all have a great term, a term without drama and politics. And I hope you keep an eye on what is coming to Low Sec and Faction Warfare. It will affect all of us.