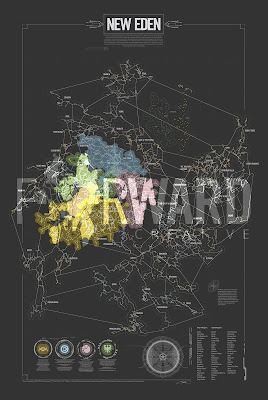 On Monday I also released (finally!) this incredible hand-illustrated poster featuring a map of New Eden!

You can order one for yourself either printed on paper or aluminum. I'm going to get the metal one for myself after I get back from our family vacation. This poster has been extremely popular since it was released on Monday, already being ordered from four different countries in the past two days! So I thought I'd take a moment and relate the history of this insane piece of work.

I started work on this project eight years ago, back in August of 2014 with Andrew Groen as the basis of his new book Empires of Eve. The original concept was to develop a full map of New Eden in vector format so it could be used to showcase the constantly changing landscape of Alliances as wars came and went over time. All I know is that the original version took me about 60 hours of hard, detailed, and labor intensive work to complete. And don't let me fool you, I enjoyed every second of it. I really love projects like this and I've always had a soft spot for map making. You should have seen my old Dungeons & Dragons maps!

After Andrew's book was released I offered up that original version as a free download to anyone who wanted it. Some people even printed their own versions and had them framed. It was just a basic map though, without any flash or color or anything. Heck you can still download the original PDF by following this link.

I could try and explain what happened next, but I think it is probably easier to hear it directly from Katia Sae. It involves a lot a math and coding and stuff like that, which I am terrible at. The result of all of this however was an extremely accurate version 2.0 of the map itself. Now perfectly attuned to the reality of New Eden. How awesome is that?

Of course I always wanted to be allowed to take that map and make it into an actual piece of art that I could provide for the community. And finally, as you know by now, I was given the chance. And while I wasn't able to finish it in time for the launch, I was able to get it into the second batch of posters. And now you can have it for yourself and hang it on your own wall.

Eight years. That is a very long time. I'm extremely fortunate to be surrounded by such an incredible and supportive group of people. From Andrew who gave me an excuse to get insane to Katia who provided the kick in the pants for an old project and gave me the accuracy I was missing. And for everyone else over the years who supported the project, downloaded the files, printed their own versions, and shared your photos. You all helped keep the dream alive.

So if you love projects like this and want to help support them (and I have dozens and dozens more!) then get over to my new store and show your support. So many projects are in the hopper waiting to be completed, but only if this great community of ours can and will support them. I finally have the opportunity to realize these long-gestating projects but I need your help to make them a reality.

What will we do next?