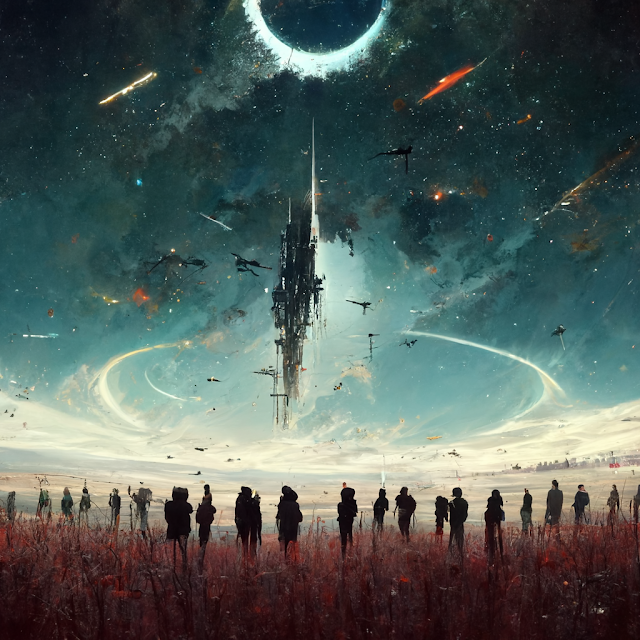 This is an image from MidJourney AI that I created using prompts to describe A Band Apart Alliance.

I've been a professional creative person for well over 30 years now. In many ways I consider myself fortunate to have started my career in one century and lived thru the most amazing technological advancements of the last several decades. I started at the tail-end of the "old way" and have adopted, accepted, transformed, and successfully used every advancement along the way. Desktop publishing. Digital cameras. The Internet. Social Media. Digital Film Editing. Photoshop. Vector Graphics. It is a long and storied list.

I knew it was coming. I grew up reading science-fiction, Omni magazine, and articles that dealt with the coming revolution. So none of this was a surprise to me. The PET computer that showed up in my fourth grade class was a welcome surprise. A year later I won a Computer Math contest at a local college, against local college students. My parents bought me an Atari 400 computer, later upgraded to an Atari 800 and a Commodore 64. By the time I got to art school I was moonlighting at a friends start-up publishing company on the first Macs, while the school was still using Apple IIe. My world was one of constant change and I knew from an early age that change was to be accepted, acknowledged and embraced. I became a Beta Tester for Photoshop and served on the Adobe Advisory Board for a few years. I bought the very first Media 100 Digital Editing Suite that was sold east of the Mississippi River in the early nineties. Sony let me borrow their first digital film camera to test and we were among the first people in the US to shoot a commercial on digital HD film. I helped introduce the very first high-speed broadband consumer product in the US. I could go on.

The point being that AI generated art is not a surprise either. Last week I decided it was time to take the plunge and see what it could do. It wasn't long before I realized how to work the prompts properly, how to manipulate the AI to generate what I wanted, and to realize that it certainly has a place among the tools we use. I could take that image above and make something out of it. Ideas, concepts, and pieces and parts - it's great at those.

And yes, an AI generated piece won an art contest. There are always horror stories. And for good reason. Let's not fool ourselves - AI art is going to disrupt things. Entire careers and professions will be eliminated at some point. It could take years. But eventually everything will settle down and we'll all move on.

In 1985 First Publishing released the world's first computer generated comic book SHATTER. You should have heard everyone gnashing their teeth, this would be the end! Comic artists would lose their jobs, the industry would never be the same again. Uh no. Computers do help artists, colorists, and other creatives do their jobs. But people still draw.

Desktop Publishing was going to end graphic design. It didn't. It did end the typesetting industry and permanently change a dozen more. The digital camera didn't end photography, although it did kill Kodak. There are dozens of other examples. Change is the only constant.

My primary concern right now regarding AI art has to do with rights issues. AI programs do not self-generate anything, rather they use millions of images to reconstruct their results. Often with the word "Getty" still visible on the final result. There is an entire thread of those available to look at, the AI just assumes Getty is part of the images it is trolling. But this will all get worked out in the courts and in the court of public opinion. Right now AI art is the hot button topic. And it will be for awhile, until something else comes along to replace it.

Us creatives will live. Once again we'll adapt, modify, and accept the new tool into our toolbox. And AI generated concepts, ideas, and bits and pieces will become just another part of our process. Until one day, down the road somewhere, the AI finally becomes self-aware and realizes it no longer needs biological life forms and kills us all.

Until then. Onward & Upward.