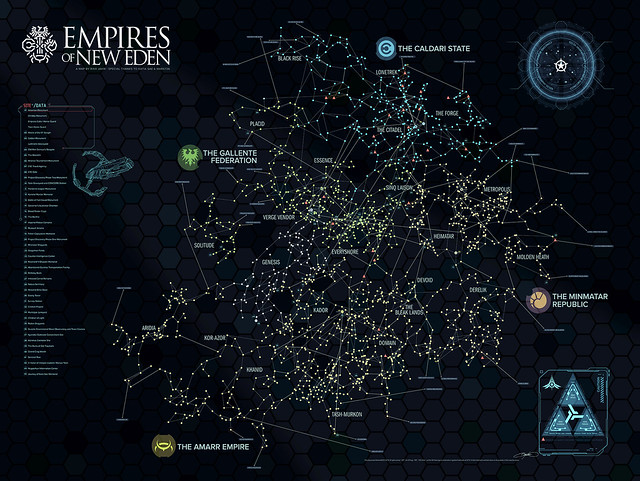 Today I released my most recent map, this one focusing entirely on Empire space!
I wasn't satisfied to just copy and paste the elements from the larger New Eden map and call it a day. So instead I focused on making this one something special. Working with Katia Sae and Mark726 I decided to add 40+ significant landmarks to the map, including the Molea Memorial, New Eden Gate, and many others. I also added Pochven space, null connections, trade routes, and labeled significant systems such as Jita, Dodixie, and others. Which should help with orienting yourself. I also added a few easter eggs for anyone with a keen eye to find. As well as a few additional elements to help make it feel like a real map someone in New Eden might have made.
As always it is a challenge to present 3d space on a 2d surface, so obviously some sacrifices to art have to be made. But I can attest to the fact that every single dot on that map is an actual star system in Eve Online and has been placed there by the data available directly from CCP Games. This map is as accurate as a human being working in Adobe Illustrator can make it. Having said that, I'm not going to say it is 100% accurate. Even I don't have that much hubris. 99%? Probably more like it.
This entire project started because one person asked me to create a map focused only on Empire space. So don't be shy about asking for things that you would like to see. Who knows? The next release just might be your idea.
Special thanks go to Katia and Mark for their help and support and also to CCP Rattati as well.
Art Artist map Rixx Store