Sometimes I do art for one person - me.  Such is the case with the Freaky Frigates collection I created two years ago for the Eve Online store. I love these illustrations and they remind me of my childhood and the wacky racer cards I used to collect in bubblegum packs. Crazy cars with monsters driving them. There were a lot of those around back then with various names and artists involved. You can google them yourself and see what I'm talking about.
Recently I asked the good people who run the Eve Store if they would mind if I created some posters featuring the Freaky Frigates and they were happy to oblige. I suspect that is mostly because they don't know what to do with them either. I made these drawings for me and I don't think anyone else actually likes or appreciates them. That's how my mind works. I work in a bubble and I rarely get much in the way of feedback, so my mind tends to create these scenarios. It may or may not be true. I have no idea.
But I was determined. So I created two new series that are now available over on the store for purchase. The above image is a special 12x36" metal print that is the very first time all of the illustrations have been featured together in one image. I even managed to get the Worm in there and that drawing has never been used anywhere before.
I also created individual "card" like versions available on both metal and foam backed squares. 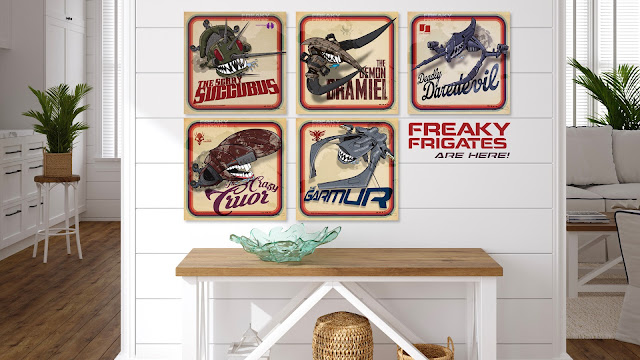 Those look like the image above.
Again, I have no idea if anyone in their right mind would want such things, but I like them and I'm putting them up for sale. I put a lot of time, thought, and energy into creating these pieces. The process for these is actually pretty intense compared to some other pieces. These are all hand-drawn from pencil sketches that I do and some of those concept pieces take a lot of trial and effort to get just right. The ships personalities come out during the drawing phase and the ships themselves start to warp and change according to that personality. As do the expressions and teeth, etc.
Anyway, I'm happy with them. And I hope someone else will be as well.
Thanks.
Art Artist Rixx Store