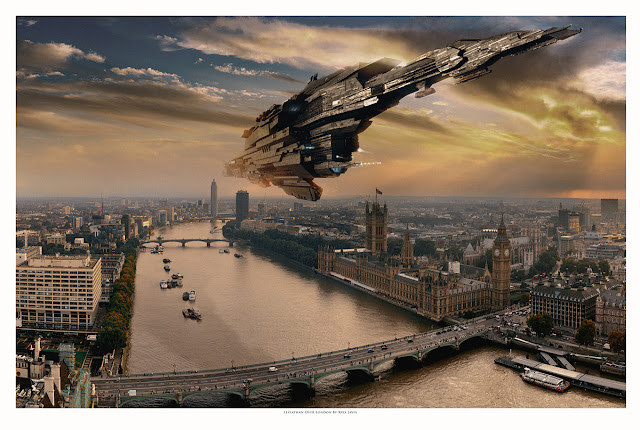 Way back in 2016 I created this image to help CCP announce the opening of their London office. It was based on a previous image I had created as part of a series of Eve ships over cities. To be honest I wish I could remake those images, they could be so much better now. But that is the way things work, time passes and you get better at things. Hopefully.

Then in 2018 we planned on attending the Eve London meet-up when we woke up the day of our flight to a nasty ice storm that knocked over trees and damaged our neighbors home. It also knocked out the power for four days and cancelled flights. Including ours. So that trip never happened. Talk about bad luck.

So today we are skipping Thanksgiving here in the states and trying again to make it across the pond to visit London for the first time. Hopefully this time things go much, much better. This trip doesn't specifically have anything to do with Eve Online. This isn't a secret trip that means I will be changing my employment history or anything like that. We just want to get away. And as it turns out, flying to London was significantly more reasonable than flying anywhere in the US over the Thanksgiving Holiday here. We debated between Paris and London, and eventually decided on the English capital frankly due to the language bonus. Among other factors, including a direct flight on British Airways between Pittsburgh and London. Which is a big deal.

So I'll be away from my desk until next week. Until then.