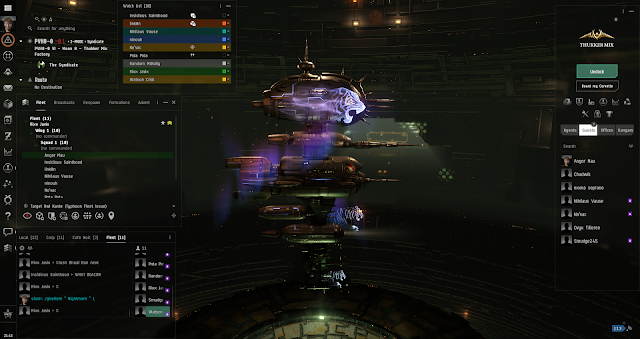 For a brief shining moment we had animated Tigers coming out of our Nightmares!

I'd like to write a compelling and detailed post regarding the new Uprising launch and I'm sure I will be covering it in detail at some point here. But I must admit that, despite my unabashed enthusiasm for the launch, the changes to FW, the sheer amount of awesomeness included in this major expansion upgrade - it is after all Alliance Tournament season here at Eveoganda.

Not to mention the continuing conflict with certain Snuffy elements in Low Sec. We have one more structure in peril as I write these words. It isn't a Stay Frosty structure, but it is part of the A Band Apart family. It was put into reinforcement shortly after enemy forces exploded the Joffy Athanor on Tuesday. The Athanor and this Raitaru are the backbone structures of our industrial team, the primary drivers of not only our industrial support but also of the year-long preparations that go into the FF4A. And while some reading those words might strangely consider them "whiney" or something - I don't know what else to tell you. Describing actual events is describing actual events.

I learned yesterday that the last structure has some critical processes that are ongoing and so I reached out to the other side to see if we couldn't reach a general understanding and avoid losing it. I won't go into those details here, but I was assured that we have reached an understanding and that the structure is safe from being blown to bits. Which is good.

In other good news support for the FF4A continues to pour in. Several large donations have been given recently to help support the event, including an unexpected gift from the <10 community of a fully Officer fitted HEL Supercarrier! Which is just mind-blowing to me. I can't thank them enough for such an amazing donation. We've also had countless offers to host the event, set-up structures, and other offers. Just know that I am considering our options and we will be going thru with the FF4A as planned in March of 2023. This will be the 9th annual version of this monumental and record-breaking event - so we can't stop now.

But we have a few months here to see how things shake out and that gives us plenty of time to make the best decisions we can about how to proceed. So hang in there and I promise to get back to everyone who has made offers or touched base with me these past two weeks.

As I said up top, right now the Alliance Tournament is our top priority and it is taking up most of my time right now. Yesterday I had to fly Rixx up to Jita in a shuttle to plant a new jump clone. Last year when I tried that it took three times to successfully make the trip, but this year I made it safely in one go. So at least that is done now.

Ships are bought and last minute plans are being made.