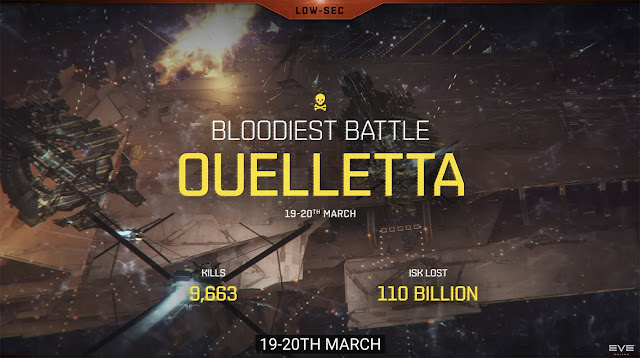 Dotlan and zKill say there were 16,000+ explosions in Ouelletta the day of the FFA, so I'm not sure where CCP gets the 9,663 number - but either way the Stay Frosty/ABA FF4A back in March 2022 was a record breaker! And the records we broke were the ones set the previous year in the FF4A from 2021. That was a huge accomplishment this year, with over 20,000 fully fitted ships built and available to hand out to the participants during the six-hour event. An amazing accomplishment. And, once again, special thanks to everyone who helped. We couldn't have done it without you.

I probably played more Eve this year than any other year since I started playing Eve back in 2008. In March I finally hit the 10,000 kills barrier that I'd been working towards all those years and just last week I passed 11,000 kills, both in the same year. And while I realize that some people have way more kills, for me and my play-style, these are milestones I happen to be proud of. I've never played to rack up numbers, I could easily do that if I wanted, my goals have always been more personal and based around individual fights. To each his own.

Speaking of individual goals it would be weird not to mention the biggest news of the year for me. During Fanfest I had a chance to sit down and talk with Anna Katrin Olafsdottir and discuss my goals for Eve art. Luckily for me we both saw the potential for working together on the launch of a new Eve Merch storefront featuring my own officially licensed work. As anyone who has been reading or following me over the past 12 years knows, this has been a long-time goal of mine. And in July of 2022 I launched my new store over at RixxJavix.com.  The store now features over 40+ original illustrations of mine based on Eve Online with many more in the works. I've sold well over 200 posters, calendars and phone cases since then to customers in 17 countries around the world. And I'm very excited about the store for 2023 and creating even more fantastic pieces for the community.

In addition to Fanfest, we also finally held our fifth Steel City Eve here at our home outside of Pittsburgh. After the years off from the pandemic, it was great to finally get a chance to have a gathering of friends once again. And, unlike Fanfest, I don't believe anyone got COVID from attending :)

And finally, after years of being annoying, we finally got the big one! Uprising happened. Factional Warfare and Low Sec finally got the attention they needed and very, very special thanks go to CCP Aurora and her team for honing in and getting this massive expansion done. It has completely changed the entire landscape of Low Sec space and brought many new and exciting promises for the future of the game along with it. To say we are excited about the potential that Uprising brings with it is an understatement. This was simply the biggest expansion in years, literally years.

In a few weeks Eveoganda will be celebrating its 13th year! And in May Stay Frosty will be celebrating its 10th year! Soon after A Band Apart will be celebrating its 9th year and in September we will all be celebrating Eve's 20th year! 2023 looks to be a huge year of celebrations and anniversaries. And hopefully, we'll be able to put together yet another insane FF4A event in March to help celebrate what looks to be an incredible year ahead.
Very special thanks to everyone who continues to read these words every day. 4.7 million of you since day one! Which is like an average of 25k of you a month, which is just insane. Thank you, I sincerely appreciate you all.
Most importantly though, thank you to the players who fly with me in Stay Frosty and in A Band Apart. You are all family and I sincerely appreciate each of you. Thank you for choosing to spend your precious play time with me and us in the greatest Alliance in Eve Online. You inspire me every single day.
Onward & Upward.