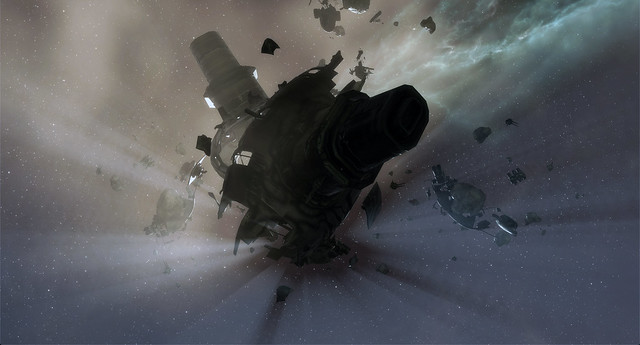 Before I get started telling you about yesterday's insanity, let me be clear from the outset about something. Inside of Eve Online, in the actual game, I really pay very little attention to who is in local with me. There is this zone of focus thing that happens while I'm flying a ship, or FC'ing a fleet, or otherwise engaged in PvP. The other guy is just a ship. Or a fleet. What happens between your ship and mine is not personal. It is just a game. A fight. A fight that I prefer to win. And one that I typically do win 80% of the time. So when I write about fights in these pages, it isn't personal. At all. Among other things, this blog is also a journal in which I chronicle events that happen inside and outside of Eve Online. It amuses me when people try to insult me by saying, "Rixx will just blog about this now." Well yeah, that's how blogs work.
For the last few years there has been this dude that likes to hang out in Ouelletta with his alts. He'll show up for a few months or so and then disappear for a few months and the cycle repeats. Over that time he's been through a bunch of different Corporations and groups, but essentially it all boils down to the same old story. Hey, it's all content and I have no issues with people trying to bring more content. Bring it on. Three years ago, back in 2019, I taunted his Phoenix into aggressing my Archon and then dropped a Rag on it for fun. So this history goes back a few years.
Yesterday I was returning to system from a quick solo roam around the neighborhood when it was reported that he was out and about in a Drake. Anytime a Drake is spotted in local everyone gets very excited, especially me. I love Drakes and I especially enjoy fighting Drakes. So I dock up and Ninouh goes out in a Gnosis to see if he'll aggress it. Sure enough he does. Now sometimes this means that he'll also undock a bunch of alts, or have back-up waiting. You never really know for sure. But luckily, earlier yesterday, I had fitted up a new Drake Navy Issue. So I figured why not give it a try? His Drake didn't stand a chance to be honest.
Normally you'd think that would be it. But no, he then went and undocked a Raven. Ninouh was outside looting his last wreck in a Geddon, so he was already aggressed. I still had a limited engagement with him, so I decided to have some fun and undock in my Nightmare. I absolutely love the Nightmare, but I rarely get a chance to use it. Needless to say, the Raven also didn't last very long.
At this point I figured we were done. So I jumped into a Slicer to go roam around a bit more. A few systems away I got the word that he was undocked again along with his alt now. They were back on station again. It's important to know that these fights all happened on station. He and his alts are all positive sec status, so all those fights above were against both them and the station. Station games are not fun, especially for those of us who enjoy extreme negative sec status. We have to be extremely careful about engagements because we are often fighting more than just the enemy ships.
By the time I got back it was just his alt on station in a Megathron. His main was sitting inside and we knew that meant he was waiting to see what we brought before undocking a counter. So we knew we should kill the Megathron quickly before he could. So that's exactly what we did. The fight was perfectly coordinated and executed. Leshinaar's Loki took the Megas shields down while I brought my own Mega up into his face. Ninouh docked up to get her Drek. And I locked him up and started pounding into him with my blasters. This one took a bit longer than the others, but just as he was about to explode his main undocked in his Nid.
The Megathron exploded and we all warped away. The Nid was a poor choice because it takes so long to lock ships, we had no problem scattering after the Mega died.
That finally seemed to be enough for them. At this point I told everyone to just deescalate the situation and let it go. We were far enough ahead and there was no reason to try and keep the silliness going after all of that.
Again, I have no idea what the deal is here and I don't really care. I was happy for the fights, the kills, and the loot was appreciated. I don't understand the need to keep throwing ships away, but we're more than thankful for the content.
PvP