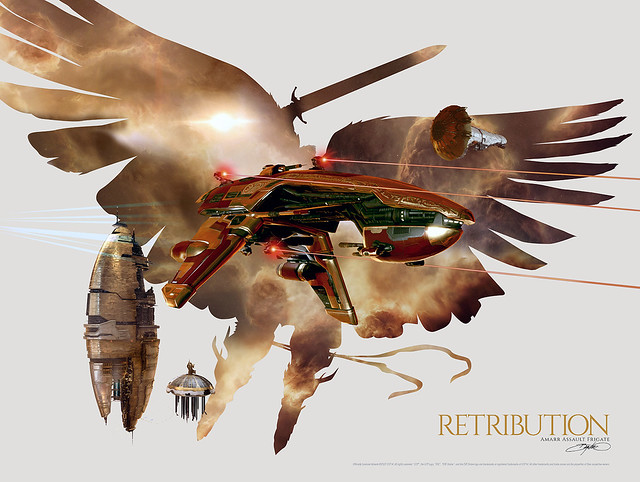 Today I released the third piece in my new Assault Frigate Series over at RixxJavix.com - this one featuring the mighty Retribution.
It's funny that when I decided to do this series I had very clear concepts for the Wolf and Hawk, in fact those two were the very first I sketched out ideas for. It makes sense, they both come along with very strong iconography attached - wolves and hawks. But then, as I joked about on Twitter, did I design myself into a corner? Because the Amarr and Gallente versions do not come along with as obvious an answer when it comes to that exact type of iconography. What exactly is a Retribution?
Obviously the Amarr are notorious religious fanatics so it wasn't hard to start going down that path.
‘Vengeance is Mine, and retribution,
In due time their foot will slip;
For the day of their calamity is near,
And the impending things are hastening upon them.’ - Deuteronomy 32:35
Yeah, that's some heavy stuff there. I'm sure the Amarr scriptures contain some very similar texts. So it wasn't long before I started thinking about a War Angel theme, angels and their wings should work. But at first I was struggling to keep it from looking like another bird. But once I added a sword and some armored legs the shape really started to come together. Since this shape wasn't as inherently as powerful in my mind as the Wolf and the Hawk, at least on its own, I decided to do something a little different and add the Amarr prime station and monument and then a Avatar Titan to help balance the weight a little. And yet it still felt a little empty to me, so I added some laser beams! And that did it, those bright red beams really brought the entire piece together.
Anyway, I hope you like it.
Art illustration Rixx Store